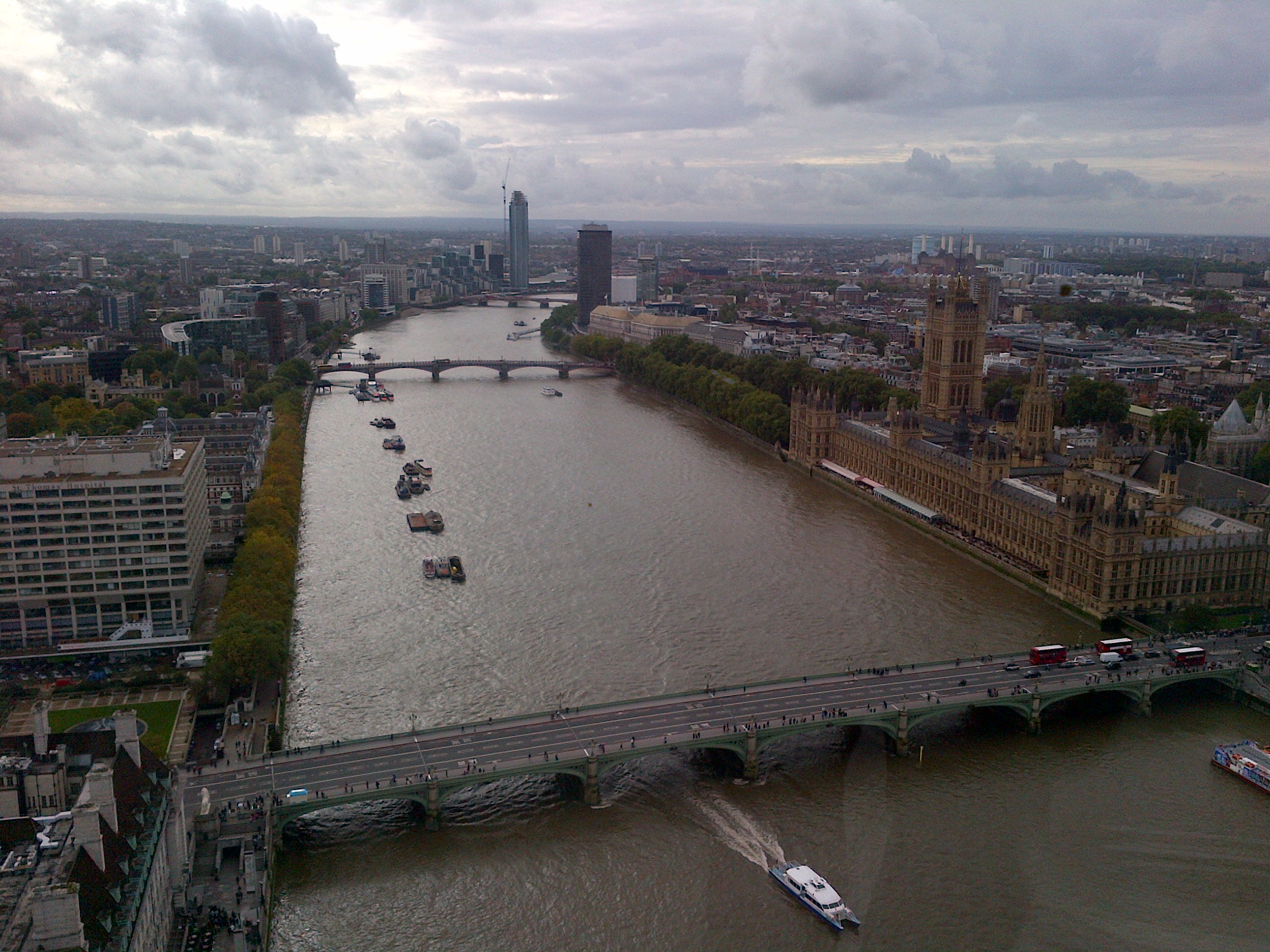 It’s been 4 years since my last visit to London so I was interested to see how things had changed considering that since my last visit the city has hosted the Olympics and the financial crash. Things certainly have changed a bit, but I don’t know if those changes are related to either of these events.

The thing I noticed the most was the cultural diversity. I spent most of my time in central London, and I was surprised that at any time 80% of the people around me either looked or sounded foreign (to Britain, not South Africa obviously). That percentage is a big and noticeable increase from my last visit. The impact is that you have to choose carefully when selecting someone to get directions from !

I did not see a noticeable impact from the financial crisis. I remember stories of shops closing down because people were not spending money, but I didn’t see one empty store. In fact, I did some shopping myself and every store had people browsing and purchasing items no matter the time of day. I went for a walk along Oxford Street at about 6pm one day and I thought there was some sort of festival on because the street was so busy that you could not walk. It was like Long Street for the NYE party (just less drunk people). I wasn’t there when the sales were on (sadly, or maybe a good thing for my bank account), but shopping in London is a pleasure for 2 reasons. One is the selection, shops that I know well here have a much bigger selection over there. I found many items I liked whereas here I seldom find things I like. Secondly, they actually have all the sizes. I have quite an unusual (for SA anyway it seems) body shape (which I like to describe as optimal) and clothes I buy in SA always need to be tailored to fit me properly. But in London they actually have everything in my size so I can buy of the rack. I don’t think you can understand how great that feels (not just for convenience, but for my ego too!).

The same applied for restaurants. I ate at many from casual to top end and they were all busy. Eating at restaurants over there is not cheap, definitely more of a luxury than here but every restaurant I went to or walked past seemed to be buzzing. I’m not going to go into detail about the food and restaurant scene as planning a separate post just on that, so keep an eye out for it (it’s going to be very interesting).

I must say that I love London. It’s an amazing city. From the public transport system to its history to its vibe, it’s truly beautiful. I spent some time sightseeing, using the Virgin Atlantic London City Guide for recommendations. I went on the London Eye because I didn’t get to do that on my last visit to London. That is one impressive piece of gear, with amazing views of the city. I highly recommend doing it if you haven’t done it before. While there I walked along the river to Tower Bridge. That really has to be the most impressive bridge in the whole world. What were they thinking?

I visited Borough Market, which is basically foodie heaven. I was so bleak because my camera ran out of battery before I got there and so I couldn’t take any photos. The food on offer looked amazing and the photos would have made your mouth water. Cheese, meat, fish, cured meats, veg, fruit, pastries, breads and so much more. I wanted to eat or buy everything. It makes our markets in Cape Town look like pretend markets.

Another highlight was the Kensington Rooftop Gardens. A rooftop garden in the middle of town that is so big you forget you are on a rooftop. They even have pink flamingoes! It is a very popular venue for weddings and high end functions and I can understand why. They also have a bar, restaurant and night club so they cater for every event you can imagine up there. I actually had dinner there, will tell you more in my food post.

London is famous for its theatre. In fact, there are posters for so many different shows that I don’t know how they are all so full. They seem to have converted any movie you’ve even half heard of into a musical. I went to see Rock of Ages, which has just been turned in to a movie. It’s an 80’s musical so it was a great show to get me in the mood for the Rewind Concert that was going to be happening in Cape Town on my return. The Shaftesbury Theatre is a beautiful old theatre. I saw it from down the road and couldn’t stop myself from getting excited to be watching a show there.

It was a cool show, but I can’t pretend I wasn’t distracted by the sexy girls which seemed to make up the majority of the cast. Their costumes were quite risqué and their dancing quite suggestive. Look, I’m certainly not complaining but I wouldn’t suggest taking your kids, that’s for sure. I’m definitely going to go watch it again next time I’m in London. Although, with tickets at roughly R1000 a pop, maybe not. I will never complain about Artscape ticket prices again. We get to see top productions like Phantom of the Opera, for as little as R250.

A few things I noticed about London… there are very few rubbish bins around. I don’t know what people do with their rubbish but the place is clean so they must just take it home. Apparently the reason is so that there are fewer places for someone to hide a bomb. I remember this from my last trip, free public toilets are few and far between. So when you stop for a pint at every interesting pub you walk past (as I might have done), you find yourself quite desperate for the toilet a lot of the time. Over there you can donate to charities by SMS for free. In other words, you don’t pay for the sms and the whole amount you donate goes to the charity as the cell network does not take a cut. You may be wondering why I noticed this. The reason is that here, if you donate R10 to a charity, you will pay for a premium rate sms and the network will take about 50% of the donation. So you spend about R11.50 and the charity gets about R5. The cell network makes a sweet R6.50. Isn’t that just sick? These networks makes billions of Rands profit a year but they need to shaft charities out of their cash as well? How do these CEOs sleep at night? Shame on them. I want to punch them in the face.

The other important thing to know about London is that there is not as much free wifi as people say there is. There definitely is some but you can’t rely on having access to free wifi at any particular place. Fortunately they have great sim card deals. I bought a T-Mobile sim card which gave me unlimited data on my phone for £5. This is amazing because it gives you access to messaging (BBM, Whatsapp), emails, browsing and most important, maps and GPS! You’ll see later why this is important. Whatever you do, don’t use data on your SA sim card when over there. It’s cheaper to buy your own satellite than download 1 email if you’re roaming.

One thing you have to love about London is the public transport. So efficient and reliable. But I must tell you a story. I used tubes most of the time because they are simple and relatively quick to use. I purchased a ticket for zone 1 & 2 valid for a week (about R500) which is valid on buses and tubes. So one night I go out with a mate for some drinks and we completely forget about the time and when we are ready to go home the tubes have closed (they close at about 12:30am). So I have to catch a night bus home. The bus system is great but if you don’t really know your way around London it can be quite complicated to work out how to get somewhere. Especially late at night. When you’re a little drunk.

So I panicked a little because getting a cab back to the hotel would have been very expensive and I’d just spend a Brazilian Rand on drinks. I couldn’t figure out which bus stop to use and which bus to catch in which direction. Which is all important information if you don’t want to end up on the other side of town. Then I had a brainwave. I pulled out my phone and opened up Google Maps (thank goodness for my unlimited data!). I told Google maps to guide me from current location to my hotel address using public transport. It realised the tubes were closed and only night buses were running and it told me exactly what to do. I followed the dot on the map down the road to a bus stop, jumped on the bus it told me to and I ended up outside my hotel 30 mins later. Google, I love you.

And that my friends is all I have to share about my London trip. It was amazing and I can’t wait to visit again. The trip was courtesy of Virgin Atlantic and their Cape Town to London direct flight. You can read my experience of the flight and my visit to the Virgin Atlantic Base here.