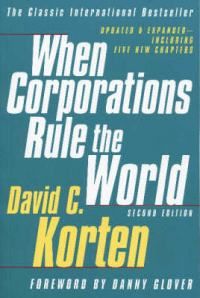 I do honestly believe that corporations are one of the fundamental reasons that the world is in the trouble it is in. So when I’m browsing Kalahari.net and I see a book titled When Corporations Rule The World, I have to buy it and read it.

I know that there are many books on this topic and I’m not sure what made me choose this one. The foreword is written by Danny Glover and Desmond Tutu calls it a ‘must read book’, but I don’t think that is why I chose it. The author, David Korten is highly qualified in the fields of economics and business management, which is good but I didn’t know that when I bought it. Whatever it is that made me choose this book, I’m glad it did because it’s a very interesting and eye opening read.

A lot of books these days are about climate change, but this is not the focus of When Corporations Rule The World. The book does mention the environmental impact of corporations, but mainly with reference to the effect it has on the people who are exposed to those impacts.

The book spends some time looking at the damage caused by corporations and how they take no responsibilty for the damage they cause. The author also spends some time looking at how corporations are fixated on growth, with little regard for the long term implications of their growth strategies. He illustrates the disparity between the rich and the poor, an inevitable result of the capitalist system.

A very interesting part of the book looks as the history of the corporation, from its very humble beginnings to the economic behemoth it has becomes. The authors shows how the corporation was never intended to have influence over government and policy and that laws were never put in place to prevent this eventuality which is now our reality.

David Korten talks about corporate colonialism and shows how corporations have taken advantage of developing countries without compunction. They have become a tool for first world countries to feed their economic growth at the cost of others. We thought colonialism was a thing of the past but it is alive and well in a much more insidious form.

When Corporations Rule The World shows how these giant corporations have circumvented the controls which were meant to be inherent in the economic model in which they operate. Competition no longer exists, costs are externalised and production is subsidised by government, all elements which skew the model on which our economic system is based.

Reading these chapters can be quite depressing. Fortunately he spends the last few chapters of the book looking at alternatives and shining a light on organisations and movements which are already making a difference.

We know that the present system cannot continue unchanged. To change it for the better we need to understand what is wrong with it and this book is a good tool in acquiring that knowledge. I highly recommend it, but as with most non fiction on heavy topics, it is quite a dry read. Almost tending toward textbook reading.