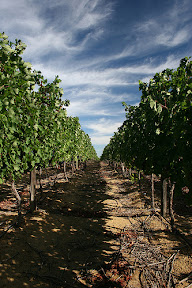 I recently went to the launch of the new Earth Centre at Backsberg wine estate. Backsberg has constructed a hay bale house which will serve two purposes, an education centre focused on environmental issues and the offices of Food & Trees for Africa. Food & Trees for Africa have been doing good work in Africa for nearly 20 years. They have an office in Johannesburg and now, thanks to their close association with Backsberg, they have one in Cape Town too (what do I need to do to get an office on a wine estate?).

I have had some exposure to Backsberg’s environmental initiatives before, having attended a presentation on the topic by Simon Back and also having been taken on a tour of the farm to see the various initiatives in action. Backsberg is actually the first carbon neutral wine estate in South Africa and one of only three in the world. They have been committed to sound environmental practices for many years and have a long list of environmental projects, some successfull and some not, but all part of their journey to reducing their ecological footprint.

If you drink wine, then you would have heard of Backsberg. It’s a wine label which has been around for many years and has a reputation for good quality and surprisingly reasonable prices. I did do some wine tasting in their grand wine tasting centre (obviously) when I was there, but I’m not going to write about the wines as it is not my area of expertise, I will leave that to the professionals. I also ate at the lovely Backsberg restaurant and enjoyed the home style food. It’s a lovely character filled restaurant with a fireplace and all, but it also has a lovely lawn for al fresco dining and there is a jungle jim for kids to play on as well. I went to the restaurant when the winter special was on, which was R95 for three courses. It was delicious (I had the chicken pie) but I can’t comment on their normal menu, although I’m sure it’s fabulous. 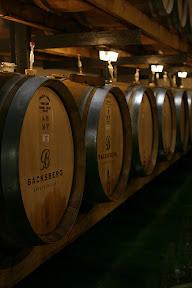 While most people know the Backsberg wine brand, very few know about their environmental initiatives. In this world of greenwashing, it’s refreshing to find brands which are taking their environmental responsibilities seriously but are not making a song and dance about it. They are just quietly going about doing what they think is right. I personally drink a fair amount of wine, in fact I am sipping a glass of red wine as I type this, and I think it’s important to consume responsibly. When we buy something, if we can choose the option which has some social or environmental initiative, we are using our money in a good way. Farming grapes can be very destructive and carbon intensive. It requires the clearing of the natural vegetation (fynbos) to plant vines and there is a lot of fuel and electricity that goes into growing grapes, harvesting them and turning them into wine. Despite the impact on the environment of growing grapes and making wine, we don’t feel bad about consuming it in vast quantities. With estates like Backsberg, we can at least consume knowing that the wine is carbon neutral.

One of their most effective projects has been removing any need for refrigeration during fermentation. Instead, they now pump cool water from the dam through vanes that move through the wine. This has resulted in a massive saving of electricity. They have also stopped bottling their wine in heavy bottles, instead option for cheaper, lighter bottles which use less glass and are cheaper to transport and recycle.

They have also changed their trellising system, which reduces the amount of ‘operating kilometres’ per hectare. This combined with smaller tractors and smaller bakkies has resulted in a reduction of fuel usage by almost 40%. There are many more things that Backsberg is doing to reduce their environmental footprint. Backsberg has also committed 10% of their farm to local fynbos to support biodiversity. There is not enough space to list them all here but you can read more about them on their website.

Backsberg is definitely at the forefront of the wine industry in terms of environmental initiatives. But they are not the only estate who are concerned for the environment and the impact of their activities. There are many estates which have signed up to be partners of BWI (Biodiversity & Wine Initiative) and many have converted to organic or biodynamic farming methods. Still other farms have social upliftment and worker empowerment progams in place.

The onus is on you to look at which brands of wine you drink, and start to find out if they are making any effort to put environmental and social projects in place. Vote with your wallet, drink wine that builds rather than destroys. As a start, read my post about Haut Espoir which is also doing good things.