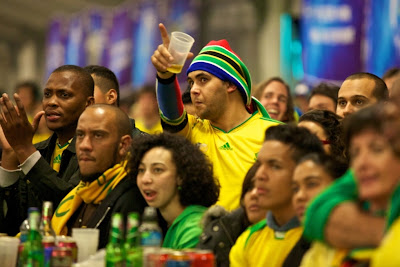 Things are really hotting up in the World Cup now that we have reached the knockout rounds. The less impressive teams have been kicked out and the matches have to have a result, no more of those boring draws. So every match is a contest between two good teams and one of them goes home if they lose. That means that they try that extra bit harder and the result is that extra bit emotional. Unfortunately South Africa is out but we have Ghana representing Africa in this African World Cup. Now that SA is out, we need to each choose another team to support and Ghana is a good option. I personally support Spain as I am half Spanish.

It seems that the energy of the World Cup is focused around the stadium. The reports I’ve heard have indicated that there has been only a small increase in custom at bars and restaurants around Cape Town but those situated in Greenpoint have been super busy. The Waterfront has also been incredibly busy. A lot of people enjoy watching the games at the Waterfront because there are so many options and the number of people makes for an awesome vibe. On the first day of the tournament they recorded 107 000 visitors through the Waterfront. That’s a phenomenal number of people. On days when there is a match at the stadium, there are also a lot of people who are going to the stadium but park their cars at the Waterfront and spend time on the Waterfront before and after the match.

It always better to watch a match where there is a bunch of people and a vibe. That is not always guaranteed at most places, which is another reason the Waterfront has been so popular, you are guaranteed to find a vibe there. For big games especially, the vibe is unbelievable. I took a walk around just before the Dutch game against Cameroon and it was a sea of orange. The place was also packed out for the English vs Germany game.

Some people like to watch in one of the many restaurants or pubs in the Waterfront, but a good option is one of the Fan Zones. The Waterfront has four Fan Zones and they are great places to watch the games because they have huge screens and easy access to food and drinks. They are full for most games, but not too full for comfort as they are strict about only letting in the appropriate number of people.

Watch out for my series of posts focusing on each of the four fan zones. In the meantime, you can get all the information you need at the Waterfront 2010 website: