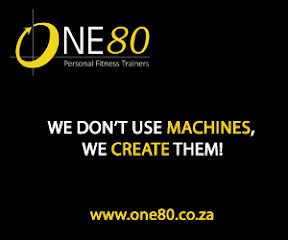 People have been asking me what this One80 training is that I have been doing, so I thought I would share the story.

As Relax with Dax has become busier, I’ve found myself not only short of time for sport and gym, but also eating high calorie meals when I’m awake and sometimes when I’m asleep. The result is that I am in the worst shape of my life. I promised myself I wouldn’t ever hit 100kgs, we when I broke that promise I realised I needed to do something. Also, leopard crawling to my car to avoid car guards almost gives me a heart attack, so fitness was an issue too.

I decided to employ some professional assistance. Not to carry me around, but to help me get back into shape. I could have got a personal trainer at the Virgin Active, but I thought maybe I should try some alternative training to see if it suits me better. I contacted One80 who have an unusual but appealing approach to exercise. Their tag line is ‘We don’t use machines, we create them’. I thought it might be nice to be a machine instead of a blob.

At most gyms the body is trained in one plane, using fixed positions such as benches or worse, machines! The reality is that the body does not function in one plane during daily activity, so why train like this? We at One80 don’t train the body in isolation, but rather focus on training movement patterns, making you strong throughout your whole body, primarily your core. The One80 style of training incorporates multi planar movements, improving strength, speed, agility, endurance, dynamic flexibility and coordination at an electric intensity – rewarding you with true health, true fitness, true results.

They had me at multi planar. I wasn’t aware of having done multi planar movements before so this was probably what I needed. I saw they were running a winter special (which is still available until the end of August 2010, by the way. Click here for details), so checking it out wouldn’t cost much.

I had the first session with Chris, the owner and my trainer where he chatted to me about my goals. I said I wanted to drive an Audi R8, he said we were supposed to be talking about fitness goals. So we put some goals in place and he took baseline measurements so we could monitor my progess. I told him that my training philosophy has always been ‘No Pain, No Pain’, he told me that was going to change.

So I’ve been going to One80 for about three weeks now. I have two private training sessions per week and one group class. I also try to supplement this with some spin classes at the gym. In summer I’ll replace that with ultimate frisbee and cardio tennis. I’ll keep you posted on the results, but hopefully they will be self evident and people will start saying “Dax, you look like you’re in pretty good shape”.