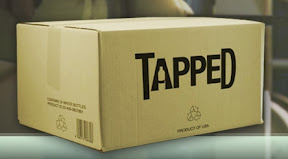 I can’t remember exactly when I became aware of the problem of bottled water. I do have a post on Relax with Dax (The Scourge of Bottled Water) which was written in April 2006, so probably sometime before then. I personally try not to drink bottled water unless there is no alternative, but many people are still unaware of the damage bottled water does. In fact, when I attended the Eat In Awards lunch, they had imported bottled water on the table even though they are promoting local, organic and fair produce!

Watching Tapped at the Encounters documentary festival has renewed my determination to rid the world of this terrible scourge. I’ve started a Facebook page and the idea is to get people to pledge that they will not drink bottled water. Hopefully we can get restaurants to pledge not to sell it. Some already don’t sell it like &Union, Olympia Cafe and Charly’s bakery. Other places like Pigalle refuse to sell tap water! The Atlantic Grill at the Table Bay hotel has a water menu with waters from around the world, priced up to R1000! These places need to feel the pressure to change.

Tapped looks at a few of the problems of bottled water. It is America focused but a lot of the points are relevant to bottled water in general. It looks at the problem of where the water is ‘stolen’ from in the first place. Large corporations pumping unbelievable quantities of water out of the ground sometimes in places where there are droughts! On top of it, they don’t have to pay for it! Water should belong to the public, the cheek of taking it and putting it in bottles then selling it back to us!

One of the points they focus on is that bottled water is not regulated. Many people think it’s ‘purer’ and ‘cleaner’ than tap water, but the reality is that tap water has to be tested regularly while bottled water never needs to be tested. Independent tests have revealed many toxins in several brands of bottled water. In fact, there have been several recalls of water which was found to be contaminated with harmful toxins.

They then looked at the plastic bottles that water comes in. Because they are oil based, their production is bad for the environment and while they are meant to be recyclable, most of them are not recycled. They are certainly not biodegradable and so they end up polluting land and sea for centuries. The bottles have also been shown to leech harmful chemicals into the water over time. This problem is a lot worse than originally suspected because the FDA tried to cover it up.

One of the interesting comments made in the movie by a scientist working with ocean pollution was that bottled water is probably the biggest problem we have and getting rid of it would be a major step in the right direction. That inspired me, it must be the easiest thing to do. Especially in a country like ours where the tap water is not only perfectly drinkable, but also tastes good.

So let’s do this! join the Facebook page and make your pledge today! Pledges can also be made in the comments section below.