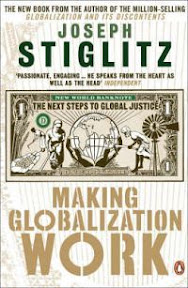 Before I tell you about this book, I want to share one paragraph with you:

The consequences of increases in medium and long term interest rates may be particularly serious, given the high level of indebtednes of individual households, many of whom took out large mortgages in response to the unusually low interest rates. What matters is not the average level of indebtedness but the number of households that will face difficulties in meeting their debt obligations. the increasing fraction of mortgages having interest rates that are variable makes this particularly worrisome.

Now, as we see this financial crisis around us brought on exactly as described in that paragraph, take into consideration that this book was written in 2006. It’s obvious that Joseph Stiglitz knows what he is talking about. It shouldn’t come as a surprise considering he has won a Nobel prize for economics, was chief economist at the World Bank and was Chairman of President Clinton’s Council of Economic Advisers.

I found this book to be extremely interesting, as interesting as his first book Globalization and its discontents. Joseph Stiglitz is not anti globalisation,  but he is anti the way it has been implemented and managed. With his vast experience and knowledge, he knows that globalisation can benefit all countries if it is managed correctly.

In his first book he describes the problems with globalisation, and in this book he makes suggestions for how we could possibly deal with many of those problems. Covering topics such as 3rd world debt, multinational corporations, intellectual propery and many more, he briefly shows the problems caused by the current way of doing things and then suggests an alternative way.

Making Globalization Work covers many topics which could themselves fill several books. It won’t make you an expert on globalisation (although it will give you some insight into the various issues), but it will prove to you that globalisation doesn’t have to happen the way it is happening right now. You will understand that there doesn’t have to be winners and losers, everyone can win.

The author makes the point quite strongly that unless we change the way globalisation is being managed we will have some dire consequences to face in the near future. Global issues, such as climate change, affect us all and the current system is ill equipped to deal with issues of this magnitude. The time for change is now,  before it is too late.

If you find this type of book interesting, you might enjoy this book too: Alternatives to Economic Globalisation