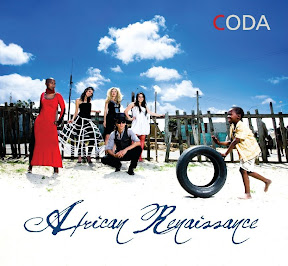 Coda launched their second album last week at the Cape Quarter. The event was most impressive, a very professional production and a showcase of the amazing talent we have here in Cape Town. I wished that I could have invited friends from around the world to see what we have to offer.

Coda’s first album, Believe, was a quality production. Since then the band has changed slighty with the violinist being replaced and a saxophonist being added to the mix. With several years of experience under their belt, Coda’s sound has developed while still retaining the appealing and characteristic mix of African and classical with foot tapping beats. The new album, African Renaissance is a pleasure to listen to. A polished sound which is hinted at by the very professional cover and wonderfully expressive cover art.

To launch an album of this quality by a band of this calibre, only a top notch function would do and the launch at the Cape Quarter was a top notch function and more. I would not have imagined it, but the Cape Quarter is really a fantastic venue for a concert. All of the restaurants were full, with every inch of the courtyard filled with tables of festive people. The stage, lighting and sounds were very professional. The sound was clear and balanced and the lighting brought the stage to life. There were two warm up acts, both African and contemporary, emphasising the theme of African Renaissance.

Coda themselves were a pleasure to watch, enthusiastic and dynamic as always. Having not seen them live for a few months, it was great to see them in action and also great to hear the tracks from their new CD for the first time. Coda has built up quite a reportoire of songs, a real treat for the many functions at which they play.

I don’t see the album at Kalahari.net but I’m sure it will be available there and at all CD stores soon. I’ve listened to mine several times and love it. I think it will make a lovely gift, especially for overseas visitors. If you would like to spoil yourself by going to see Coda live, go check out their website for news on their upcoming gigs, info on the band, etc.