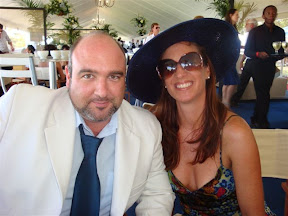 Having done my research into what the Queen’s Plate is all about, I decided I had better take it seriously. So I organised myself a white suit and a hot date (see pic 1 – and notice my strict adherence to the blue and white theme). I also tried to have an early night so I would be fresh, but actually ended up having quite a late one at Ricks’ Cafe. It wasn’t a problem though, we were aiming to get to the races at about 1pm so I had time to sleep in and run some errands before slipping into the suit and picking up aforementioned hot date (actually she picked me up).

Because the Queen’s Plate is about one fifth the size of the Met, everything is different, including the approach and parking. There was no traffic congestion (something I am allergic to since the Big Concerts Killers concert debacle) and we drove in and parked inside the track (yes, in the middle). Then ambled our way to the Style Lounge Village. There were several colour wristbands and we found the tent we belonged in quite easily. The hospitality area is just a small section of the track, very contained. We had some snacks and drinks and placed some bets and actually watched some horses run past (yes, can you believe it?).

It was a terribly hot day so we were happy to be in the tent, with somewhere to sit and drinks on tap. The one walk we did take to see what was happening around nearly resulted in sunstroke. Once the heat subsided a bit and we were tired of losing all our money on completely random bet (we chose horses we liked the sound of), we moved over to the bar and did some socialising. A few drinks more and I was ready to face the fans. We left the safety of the tent to hang with the crowds outside. Soon after that, the afterparty started. 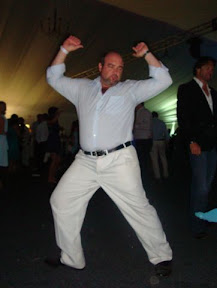 Gang of Instrumentals, Just Jinjer, Goldfish and Shaun Duvet. With a fantastic lineup like that, the party couldn’t do anything but rock (see pic 2)! We partied until they switched the music off at 11pm. We reluctantly made our way home, knowing one thing for sure: The Queen’s Plate is going to get bigger and better every year. I’ll see you there next year.