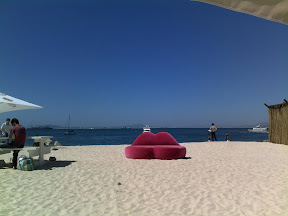 I’m impressed by what they have managed to do with a shed, because that’s basically what it was. To take a large steel wharehouse and turn it into something that is visually appealing and has ambiance and character is an achievement. They have focused their money and energies on what is important and ignored things which aren’t that important. As you walk in your attention is captured by the awesome, huge bar that runs the length of the venue. A very interesting and unusual bar counter is framed by nicely lit shelves holding liquor behind the bar. Then you turn briefly to the right and see the huge 24 seater table in the middle of the place, surrounded by smaller tables and at the end is the kitchen hidden from view by a large pizza oven. Turning to the right, you look through the big steel doors and see the view in the picture above. You won’t be able to stop yourself walking outside to survey the scene.

They shipped the sand in and have created a private beach which a beautiful blue sea horizon. The sea is often filled with boats adding to the composition of the image which will stay in your mind long after you have left and may well be a stage for some pleasant dreams one night. They have resisted the urge to pack the beach with tables and chairs, with only a few tables, chairs and couches, the beach retains its integrity.

When I went for lunch we had a table on the sand which was novel but I think I prefer terra firma so would elect to sit on the actual veranda next time. There are tables with attached benches on the sand which would be a better option. Although when I was there one of the table capsized as they are not properly supported. On my second visit I noticed that they now put bricks under the benches to prevent similar incidents. The beach seems to be quite protected from the wind, but it did get breezy when I was there for lunch.

Once you’ve spent some time there and are no longer overwhelmed by the awesomeness, you start to notice the small things like the rusty steelwork, etc. But it really just adds character and authenticity to the place. They also have a boutique selling clothes and other things as you walk in. There is plenty of space that is unused and I didn’t see anyone using the plunge pools. It could almost be a day club, where you could go and use the recliners and drink cocktails, catch some sun and cool off in the plunge pool. Maybe that is the vibe they are heading for once they are confidently serving the current tables they have.

The food and the wine list are the same as the Grand in Camps Bay. Both are short but good quality. For lunch I had the ceasar salad (R70) as a starter, which was quote nice although fairly plain lettuce cut into very large pieces, so not elegant by any means. For mains I had the steak which I had been wanting to try and it was very good. My dining partner enjoyed her caprese salad starter and calamari main.

We did have some issues with our lunch. We had booked an outside table but they gave it away before we arrived. They did make a plan though. The service was a bit sketchy to begin with and they had no beers other than Corona. But on my second visit, things were much better. I went with a part of 24 for dinner and we sat at the big table in the middle of the restaurant. The waitress suggested we have a set menu with platters of food rather than ordering a la carte. This was obviously the best option as I doubt any kitchen will be able to bring out 24 dishes in reasonable time. They started us off with some pizzas. This is the one menu difference between the Grand on the Beach and the one in Camps Bay, the beach one offers pizza. It’s a long rectangular pizza cut into squares and there are only two options, one is a margarita (R100) and the other has some toppings like anchovies, olives and artichoke hearts (R120). It’s a simple pizza but tasty and with a nice thin base. Accompanying the pizzas were some salads, also simple but with fresh ingredients. We also were given nice bread rolls at the beginning.

For mains they brought platters of the fillet, chicken and kingklip, with bowls of chips and veggies as sides. It was all delicious, even the kingklip was nicer than the one I tried at the Camps Bay Grand. There was no dessert included and the total price was R170 per head. Quite steep but it was an awesome evening. Most mains are over R100 anyway so to have two courses at R170 is not unreasonable.

Our waitress that evening was on the ball, she handled our big table with no problems. The managers are pretty jacked so issues that may arise are soon dealt with and in a positive way. You need to get yourself to the Grand on the Beach, it’s a great venue and a good dining experience. Spoil yourself. Go!