I like to play the devil’s advocate. I think it’s very important for people to get both sides of the story and to critically examine the evidence for and against each of the sides. I’m very nervous of confirmation bias. You can follow that link to the wikipedia article on it, but an extract of the article defines confirmation bias thus:

Confirmation bias is a tendency to search for or interpret new information in a way that confirms one’s preconceptions and avoids information and interpretations which contradict prior beliefs.

We all suffer from confirmation bias to some degree, but being aware of it can help us to avoid it at least partly. I actively try to expose myself to both sides of the story, especially topics which I feel strongly about. I feel very strongly that GM foods are a danger to our future, but I try to expose myself to the other point of view. For this reason I attended a presentation at the UCT Graduate School of Business which was pro GM. It was an interesting presentation and those who attended were enthusiastic in their support (except me). 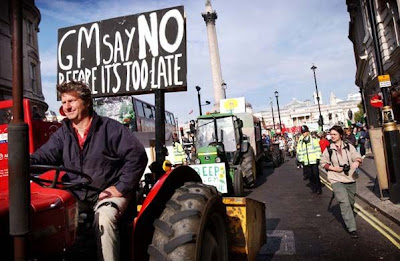 The presentation was given by Prof. Bruce Chassy, a biochemist at the University of Illinois. The invitation stated that the presentation was designed to give the balanced facts, but I don’t think it would be humanly possible to give a more one sided presentation. I have no problem with one sided presentations, but don’t sell it as balanced when it is not balanced by any stretch of the word. Prof Chassy is a biochemist from an overseas university and the invitation includes a long list of the work he has done for various organisations.  the implication is that he obviously must know what he is talking about. I have a problem with appeal to authority, While I respect the qualifications and experience of individuals, there are many reasons why the information they share may not be balanced or even true, I believe the facts should speak for themselves.

Prof. Chassy himself made the point strongly that all people who are against GM foods are just uneducated rabble who have no idea what is going on and those who are pro GM foods are very intelligent scientists. Not only is this an appeal to authority, it is also completely and utterly untrue. There are more scientists than I can count who are anti GM foods. Remember, we are not talking about research into genetic modification, we are talking about allowing GM foods to be released into the environment and eaten.

Prof Chassy spent some consideral time explaining to us that we will in the future be unable to grow enough food to feed the world’s population, a fact I can agree with. However, his proposal that GM foods will allow us to grow enough food, I do not agree with. In fact this is what this post is about. I want to show that contrary to Prof. Chassy’s comment that no scientists are anti GM, it is actually scientists who are saying that GM is not a solution to the impending food crisis and that in fact, organic and sustainable farming methods are a better option.

I’ve listed below just a couple of reports written by scientists which are anti GM. There a many more reports and studies which I have not included because I think what I have listed below is enough to make my point.

In 1999 more than 600 scientists from 72 countries signed an ‘open letter from world scientists to all governments’ which called for a moratorium on the environmental release of GMOs, a ban on patents on living processes, organisms, seeds, cell lines and genes and a comprehensive public enquiry into the future of agriculture and food security.

In 2004, the Independent Science Panel on GM which consisted of scientists who specialised in fields relating to GMOs, released a report which revealed that sustainable farming methods are a better option than GM crops. I have a copy of the report in PDF format, email me if you would like a copy.

This year (2008), the United Nations Environment Programme released a report entitled Organic Agriculture and Food Security in Africa. This report showed that for Africa, at least, organic would be a good solution while the biotech companies are trying to tell us Africa needs GMOs.  Here is an exerpt from the executive summary:

Also released in 2008, the report on the International Assessment of Agricultural Knowledge, Science and Technology for Development (IAASTD), compiled by a panel of independent experts and scientists convened by the UN to look at the global problems of hunger and food. I wrote more in that in this post.

If one takes the time to do some research, it becomes evident that there are many scientists which do not see GMOs as the solution to our food problems. Activists are just the people who have taken on the task of informing the public.