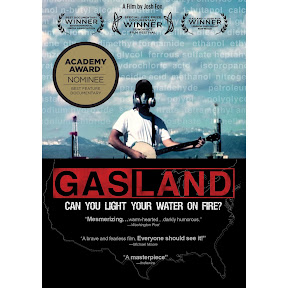 Imagine you lived somewhere for forty years. Somewhere out in the country where the air is clean and you’re surrounded by open fields and mountains in the distance. You live a simple life, making a living from farming the land, but you’re happy. You’re healthy and your kids are healthy and life is good. It’s the life you’ve chosen and you have never regretted it. Until now.

A short while ago, energy companies started drilling for natural gas in the area, using a technique called hydraulic fracturing. There are thousands of  wells around now, some of them literally in your backyard. People came to visit you to tell you not to worry, the drilling would not affect you in any way. They also mentioned that there was nothing you could do to stop them.

So you lived with the noise. You came to terms with the fact that your beautiful surroundings and views were now peppered with drilling rigs. You ignored the continuous stream of trucks and the stinky pools of chemical waste water left open to evaporate. But seeing your property and home shrouded in a brown cloud of air which was impossible to breath, scared you. You started to be sick all the time and so did your whole family. You spoke to your neighbours about it and they were experiencing the same thing. And then the final straw, your water in your wells and from your taps became undrinkable. You didn’t know but it had been bad for a while, but now it was really bad. So bad that you could put a flame to the water coming from the tap and it would catch alight.

So you called the company that was doing the drilling. They came and took sample of the water to test. They returned a while later to tell you that whatever was wrong with the water could not have been caused by fracking. So now you live in an industrial area, breathe poisoned air and drink poisoned water so that you are sick all the time. Still happy?

This is all taking place in the United States. Did you know there is a law called the Clean Water Act? It was created in 1974 to protect drinking water from both natural and man-made contaminates. We should call a governmental agency to help us then. Maybe the Environmental Protection Agency? No, that won’t help because apparently there was another law passed in 2005 called the Energy Bill which exempted natural gas drilling from the Clean Water Act so there is nothing they can do. You are on your own my friend. You and your family might as well drink the poisonous water and die because energy companies want to make some money.

That my friends is the story of fracking. The circumstances around Karoo fracking may be slightly different but you can bet that the results will be similar. Go and see Gasland. Then take a stand. Don’t let these big companies frack up our planet.

Then get to the Sport Science Institute in Newlands on Friday at 4:30pm for the public hearings and a little protest.

Did you know that the energy industry tried to have the documentary disqualified from the Oscars this year?
Find out more on the official Gasland website. Here is the trailer