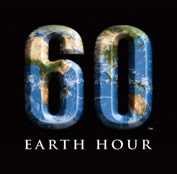 The basic idea is that everyone switches of their lights for one hour on the same day at the same time. This year it’s the 28th March at 8:30pm (I think it’s supposed to be the last Saturday in March). Obviously it doesn’t make a difference that everyone does it at the same time but it’s a way of showing solidarity. I’m not sure what the impact on energy consumption is or will be, and I realise that this exercise is more about creating awareness of energy use than actually saving energy, but I think it would be a good idea to make this a regular thing. Maybe once a month or once a week. That would keep it in people’s minds.

This year, Earth Hour will see the lights go out on some of the most recognised attractions on the planet, including Cape Town’s Table Mountain, Christ the Redeemer in Rio de Janeiro, Merlion in Singapore, Sydney Opera House, the iconic 6-star hotel, the Burj al Arab, in Dubai, Millennium Stadium in Cardiff and the world’s tallest constructed building, the Taipei 101.

Earth Hour 2009 has one major aim: to unite the citizens of the world in the fight against climate change in order to convince governments and world leaders that our planet cannot wait any longer. There simply isn’t enough time, and therefore 2009 is a colossally important, if not the most critical year, to take action on climate change. 2009 is the year we decide the future of our planet.

Go and check out the website and sign up – signing up helps them to measure how much support they are getting.