If we did a little survey and asked people which restaurant serves the best calamari in Cape Town, we would get a selection of answers. I personally would mention the calamari at Wharfside Grill (at Mariner’s Wharf in Hout Bay) and the Miller’s Thumb. But we all know that the place that would get the most votes at the end of the day is the Chapman’s Peak hotel restaurant.

It turns out there are some good reasons for that. One is that they get their calamari imported from a specific South American destination (not Patagonia which we hear so often) and the other is that they have a special technique for cooking the calamari. This involved a double cooking process of frying then grilling. This is obviously apart from the batter recipe and all that. They are not unaware that their calamari is exceptional and they take great pride in it, ensuring it is always up to the standard of quality the patrons have come to expect.

Thus, when they invited me to come and have lunch there, I gladly accepted. It was a sunny Sunday afternoon and the veranda was packed, but did you know they have an inside section as well as an additional section which they can close off for private functions (seats up to 60 I think). Most people only want to go to Chapman’s Peak hotel when it’s sunny but they have recently revamped the inside section so it’s a good option even if the weather is bad. In fact they have a nice lounge with a fireplace too.

Anyway, we did sit outside and enjoyed the great view and the sunshine. There were only two of us, so we didn’t get to try the menu extensively. We decided to go with their strong point, seafood (I guess most people do that, because they were running some really good specials on meat dishes). We ordered a Greek salad (R49) and the calamari & chorizo starter (R45) to get us going. This is not the calamari you hear so much about, this is the Patagonian tubes grilled with Portugese chorizo. The salad was really good, fresh and generous (easily enough for the 2 of us). The calamari & chorizo was also good.

We wanted to try a selection of seafood but couldn’t handle a whole seafood platter for two (R600) so opted for the Summer platter (R160) which contained 6 queen tiger prawns, the famous calamari and linefish. This is a great platter, with the chips and our Greek salad it was enough for both of us although I did cheat and ask for a couple of sardines. I’m a sardine fan and they were really nice (normal main portion is R79 for 4). Everything on the platter was excellent and the calamari really is spectacular.

There were some tempting looking desserts (average price R35) but we decided to be good and skip dessert. We also didn’t drink wine, I had a beer. The restaurant is not expensive, you can find wines which are reasonably priced.The service was friendly and attentive, we didn’t really put it to the test though.

So in conclusion, the reputation for best calamari is well deserved and the rest of the menu is pretty good too. Prices are reasonable and the view is stunning, you can’t go wrong. But do book because they fill up quickly. 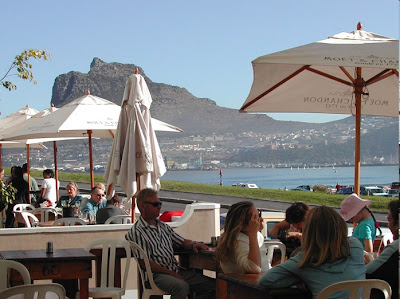