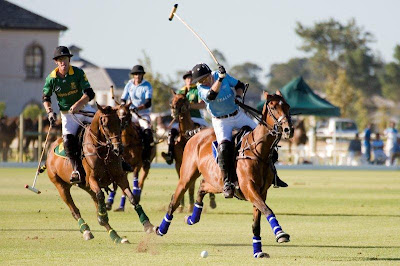 Polo is something I’ve normally only seen in movies, a game for the wealthy. I thought I was a fancy pants going to the Met or the Queen’s Plate but didn’t think I would progress from horse races to polo. Now I’ve been to polo matches a few times and it’s pretty cool. It’s actually quite a lot more interesting than horse races.

The last time I went to watch Polo was on Friday. I went to Val de Vie for the launch of Ryk Neethling’s wine and there was a polo game was part of the festivities. It was a fun evening and you’ll be able to read my review soon, I’m just waiting for some photos.

On the 26th of February, Val de Vie will be hosting the BMW International Polo Series where South Africa will be playing against India. It will be a fun day, something completely different. If you would like to win a pair of tickets (and a bottle of Val de Vie wine), carry on reading…

To enjoy and appreciate any game properly, you need to know the rules so I’ve appended the basic rules of polo below. To win one of the two pairs of tickets I have to giveaway, simply send an email to dax@relaxwithdax.co.za with the subject ‘Polo competition’ and in the mail include your name and cell number and the answer to this simple question (the answer is in the rules below):

How many players in a polo side?

The competition will end on Sunday (20th) and the winner will be announced on Monday (21st). The BMW International Polo Series will takes place on the following Saturday (26th) at Val de Vie.

The basic rules of polo:

* The first is that polo is a tactical team sport with 4 players a side.
o Like all tactical team sports, each player fills a specific role and supporting the team effort on both offence and defence.
o The objective of the game is for a team to score the most goals by hitting the ball through their goal posts at the end of the ground.
o Like other high contact team sports such as Rugby or Football, defensive plays, such as “riding off” and “hooking” are important defence tactics and can result in fouls which incur penalties.
o Normally, polo is played on an outdoor polo field which is 300 yards long and 160 yards across, the area of 10 football fields.
* The second is “the line of the ball”. This is the imaginary line the ball creates as it travels from point A to point B.
o This “line” determines the strict rules about how players can approach and attack the ball and each other, ensuring that the players and horses, travelling at 35mph when at top speed, do not collide resulting in serious injury to either horse or rider.
o When two players ride to the ball, both hoping to hit it, they must ride on either side of the “line” so that both will have access to the ball. They must remain on opposite sides of the line, thus minimizing the risk of collision.
o The line remains set until the ball is struck by a player, changes direction, and a new line is formed.
o A player may cross the line only when it does not create a hazardous situation such as a collision with another rider. This may result in a foul and consequent penalty being awarded.

* Team members are numbered 1 to 4 with No 1 being the attacking or offensive player and No 4 being the back or defensive player.
* In Indoor or Arena polo, the pivotal player on the team is the No 3, as he must stem the opponent’s offence, turn the play to the attack, and pass the ball up field to his No 2 and No 1 player, as they turn to press the penetration toward the enemy goal.
* The No 1 player concentrates on opportunities for scoring, but also has the defensive responsibility for the opposing No 3 player. The No 2 team member supports No 3 on the pivotal plays, turns quickly to follow the No 1 player on attack, and harasses the opposing No 2 player.
* The No 4 player is primarily responsible for defending the team’s goal. These assignments are not rigid, and each player must be prepared to make any play that will benefit his team, temporarily changing position as the pattern indicates.

* There are general rules covering everything from the size of the ball to the colours of the team shirts, and field rules setting regulations for actual playing situations. When a foul occurs the umpires can award anything from a free goal to a free hit from a distance determined by the severity of the foul. See the Polo Rules section for a comprehensive list of rules.
* Scoring is accomplished by putting the ball across the goal line between two goal posts 24 feet apart.
* Three umpires, two on horseback and one on the side of the field, oversee the game and enforce the rules. Infractions generally involve hazardous riding and dangerous use of the mallet. Umpires can be recognised by their shirts which have vertical black and white stripes.

* The full game is 8 periods, but often in club matches 4 or 6 periods are played.
* They are 7 minutes each in length, plus a 30-second overtime. Each period is called a “chukka”. The brief periods are necessary due to the stress placed on polo ponies who will spend a great deal of that time galloping up and down a 300 metre ground.
* Each player in high goal(top level professional) tournaments uses a fresh pony for each chukka because the game is played at a very fast pace, with the horses galloping much of the time. In club games, ponies may play 2 chukkas in a match.
* Should an overtime be required, a seventh mount may be called upon, or a player may go back to his best mount of the day. Three minutes are generally allowed between chukkas to change horses.