El Burro has taken over the space where Buena Vista used to be in Greenpoint, above Dopio Zero. I have to say that they have transformed the space into something quite fabulous. I was impressed with the way it looks and everyone I’ve taken there has also been impressed. Not only is the decor really cool, but they have removed the lounge and moved the bar so the space has really opened up. There are a lot more tables and chairs (and booths) but the place is not cramped anymore, you don’t have to stick your bum in someone’s face as you squeeze between tables like you had to do at Buena Vista.

The venue has a  much lighter and open feel about it, a genuinely pleasant space in which to spend time. I’ve included quite a few pictures of the space  (click on them to zoom in) so that you can see the amazing light fittings, the assymetric shelves with pot plants on set against raw brick. You can also see the red wall at the bar side with interesting things hanging on the wall and there is also a pic of the outside area with fairy lights around hanging pot plants. The place just looks awesome, even the logo is cool.

But there is something missing. Buena Vista may have been dingy and cramped, but it had a great vibe and the place used to rock till the early hours of the morning. I was at El Burro with a group of friends celebrating a birthday on a Friday night recently. There must have been about thirty of us and we were keen for some festivities, but once everyone had eaten we had a couple of drinks at the bar, chatted and left. I think I’ve worked out why. It’s the sound. The speakers are smaller than the speakers I have attached to my computer and so the sound is weak. I don’t think it’s necessarily the volume, I think it just doesn’t have enough power to create a vibe. But maybe they don’t want a festive bar vibe, maybe they want people to go there for the food. But I don’t think that’s going to happen.

El Burro is not your typical Mexican restaurant serving cheap Tex Mex food. The offering is more sophisticated and apparently more authentic. I must be honest, I have never been to Mexico so I can’t tell you what authentic Mexican food is like. But, by strange coincidence another ‘authentic’ Mexican restaurant, called San Julian,  has opened nearby El Burro. San Julian is run by a Mexican family which immigrated here a few months back. When I say run, I mean the brother cooks, the sister serves and the father plays the guitar and sings Mexican folk songs (quite well). The point being, the food is completely different to El Burro. You can read my full San Julian review here, there are quite a few interesting comments.

I’ve eaten at El Burro twice, the first time I went with some friends and didn’t enjoy it so they asked me to return and try some of the other menu items. The second visit was certainly better. On the first occasion I tried the chiles rellenos (their version of chilli poppers – R46) to start. These are not battered and fried but are grilled and have a very smoky flavour. None of us were excited about them. Someone else ordered the ceviche starter (R54) which reminded me of tuna salad. I tried it again on my second visit and it was much better. On my second visit I had the elotes (R32) which were interesting and quite nice. Basically corn on the cob with mayo and spices.

On my first visit I had a fried corn quesadilla (R65) for mains and it was terrible. It’s made from fresh corn dough which just sucks up the oil, I couldn’t eat more than half of it. One person ordered the mushroom quesadilla (R70) which is grilled and was a lot nicer.

On my second visit I opted for the tacos. I selected the pork shoulder (R66) filling and it was pretty good. My partner ordered the linefish which was Norwegian Salmon and she enjoyed it. The sides and condiments are quite unusual (apart from the ubiquitous guacamole and sour cream). Pickled red onion and roasted tomato relish accompany the salsa and more. 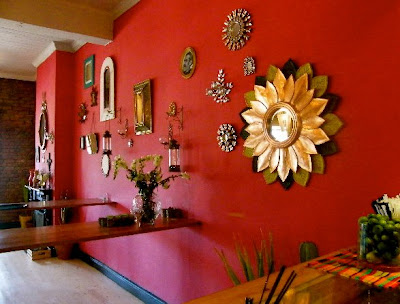 I thought I would try the creme caramel (R32) for dessert, being a big fan, but it was really not good. Despite the waitress assuring me it was the best in the universe, ever. It lacked flavour and was to heavy/thick.

So depending on what you order you can have a bad meal or a good meal, but not a fantastic meal. This is why I don’t think El Burro should focus on the food. I wouldn’t go there to eat, but if I was going there anyway, I would eat. I say up the vibe, and let people enjoy the beautiful space.

The wine list is short but reasonably priced, offering one or two options of each cultivar. The most expensive is R185 for Meinert Printer’s Ink and the house wine is Swartland at R70 a bottle or R23 per glass. There are six other wines available by the glass. It’s not a particularly interesting list, you will recognise all of the names, but at least the wines are fairly good quality. I actually enjoyed a cocktail called a Paloma (R35) which is quite tangy and refreshing. The margarita at R35 is also a good option.

You really need to get to El Burro just to see the space, even if you just have a drink (try one of their 27 tequilas). If you decide to eat, order carefully and you’ll have a good meal.