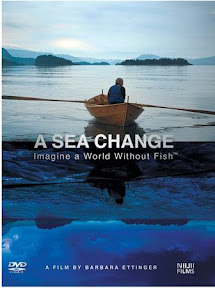 A Sea Change is a gentle documentary, in contrast to some of the documentaries which give you nightmares for months afterwards like Earthlings. This documentary looks at the topic of ocean acidification which is something most people are not aware of. We are aware that the oceans absorb carbon dioxide, in fact scientists have been looking for ways to make the oceans absorb more carbon dioxide in an attempt to reduce climate change. However, as the level of carbon dioxide in the ocean increases, so does the acidity of the ocean. The change so far has been very slight and mostly in colder areas but the implications are huge.

Many sea creatures need a certain level of acidity (low) in order to develop their shells, etc. The changing acidity has already started to affect organisms at the bottom of the food chain, pteropods. They are very small creatures and have almost transparent shells which are degrading due to rising ocean acidity. If pteropods were to die, it would cause a chain reaction which could result in the oceans having no fish. This is obviously a long term and extreme outcome, but the process of ocean acidification takes so long to reverse that if we don’t start doing something now, we may not be able to stop it.

The documentary features 65 year old Sven Huseby who reads an article about ocean acidification and is horrified by the implications. He decides to investigate further and the documentary follows his travels as he meets with experts and attends conferences in various parts of the world. As he learns more, he writes what he finds out in a letter to his grandson which he intends to give to him when he is old enough to understand. What this means is that the message is very simple and easy to understand. He doesn’t get into complicated science, but using simple illustrations he gets the message across.

I think this is a good documentary which will assist anyone with their understanding of ocean acidification but what I like about it and what separates it from other documentaries is that it is suitable for kids. The message is important for children and this documetary delivers it gently.

This screening was organised by a group called While You Were Sleeping: http://whileyouweresleeping.wordpress.com/

This is another interesting website on ocean acidification: http://oceanacidification.wordpress.com/