You don’t really need me to review this restaurant for you. Jardine has been around for nearly four years now and in that time it has been in the Eat Out top ten several times, has been awarded 3 out of 3 starts by Rossouw’s Restaurant Guide and has also been in the World Top 50 Restaurants. Apart from that it has consistently received rave reviews from all who visit it and has accumulated an enviable following.

I went for the first time only recently, and despite my elevated expectations, I wasn’t disappointed. Unfortunately our visit was rather rushed as we had a show to attend the same evening. I would like to have taken my time and made the most of the experience but will hopefully have the opportunity to do that on my next visit. We did mention to the kitchen that we were under time constraints and between the kitchen and the service staff, they did an excellent job of moving things along at a pace where we didn’t run late but didn’t feel rushed either.

Jardine is housed in a double storey building on the corner of Bree and Bloem Streets. The downstairs section is a bar and small lounge area where one could have pre drinks, but it’s non smoking so smokers have to smoke outside. The 70 seater restaurant is upstairs. Tables inside have a good view of the open kitchen and can enjoy watching the hustle and bustle as their dishes are prepared. The tables on the enclosed balcony will suit those who prefer a quieter dining environment. The decor is fairly understated, it doesn’t make you look around in awe but it equally won’t earn anyone’s disapproval. Jardine is definitely about the food. 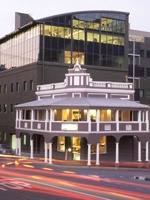 So let’s talk about the food then. I was told over and over that Jardine is expensive but it’s not that bad, especially considering the level it is at. Currently it costs R240 for 2 courses, R280 for 3. The 5 course Chef’s menu is R380 plus R320 if you want it paired with wines (that’s an expensive dinner). Due to time constraints, we decided to just have starters and mains.

Jardine prides itself on using fresh, local produce so the menu changes regularly. The dishes we ordered may or may not be available when you eat there but I think what’s important is the quality and calibre of the dishes that are served. The menu is short, with about 4 each of starters, mains and desserts.

Starters we ordered were the Sea Salt and Sugar cured Norwegian Salmon (a speciality of theirs), Foie Gras Au Torchon (I didn’t order, don’t freak out please) and the quail ballottine. All of them were excellent. The Foie Gras was paired with a dessert wine and was quite a treat for the palate. Speaking of palates, we enjoyed the little palate cleanser at the end of the first course.

Mains included the Butter Roasted Line Fish, Roasted Kroondal Duck Breast and the Grilled Porcini Mushroom with mushroom tart and herb tabbouleh. Again, well prepared, well presented and well integrated flavours were the common elements of all the dishes. We couldn’t help but taste each other’s dishes, risking some food envy, but they were all equally impressive.

The wine list is home to some really good wines with prices ranging from the house white (R100) and red (R165) right up to some French wines at R8700 per bottle (that’s not a typo). For the budget conscious there are a few options under R200 but mostly they wines are above that level.

We were there fairly early so the place was quite empty (I’d recommend booking though, as they are full most nights) and we had the waiter’s dedicated attention. But apart from being attentive, the service was at a level one would expect from an establishment of this calibre.

I can see why they have received the number of accolades they have. Jardine is definitely worth a visit, a great option for a special occasion. They have recently started serving lunch on Wednesdays, Thurdays and Fridays. The mains are priced at R80, with starters and desserts at R40. I went the other day to try out the lunch and we had another fine meal. The Porcini Mushroom main really is spectacular. I had the sirloin (rump on this occasion) with bernaise which was very good and the other dish we tried was the line fish on squid ink risotto. The risotto looked quite intense because of the black colour but it was actually very light, contributing to a most delicious dish.

The lunch menu allows for single course meals, which makes for a quicker and cheaper dining option. An excellent option for a business lunch I would think.

This might be a good time to mention that I have also reviewed the Jardine Bakery which is housed in the same building: