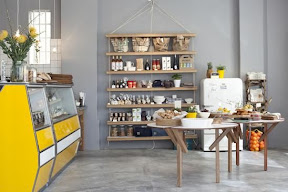 When the Biscuit Mill opened a few years ago, it didn’t take a prophet to predict that Woodstock was on track for a revival. I must admit that I imagined it would happen faster but I think it is finally hitting a tipping point now. There are several restaurants and clubs popping up. I enjoy getting lunch from The Kitchen, and I recently breakfasted at a new place called La Bottega. I’ve seen a newish place called Bread at the revamped Bromwell which I want to check out. Then there is The Superette opened by the guys who brought you the Neighbourgoods Market at the Biscuit Mill.

It’s quite easy to miss as the signage is quite subtle. I drove past it a couple if times before spotting it. But it’s on the right hand side, just before the Biscuit Mill if you’re heading away from town. You may not be aware that the guys who do the market also brought you the What if the World gallery, so they are creative guys. Which might explain why, when I walked into the Superette, I wasn’t sure if I was in a restaurant or an art installation.

The place is such a carefully put together combination of retro and cool contemporary elements that it’s hard to believe it’s a restaurant too. After eating there, it does seem that the restaurant element is a bit secondary. The space is quite empty, with each piece of furniture or decoration demanding acknowledgement, hence the gallery feel. The retro corner cafe counter in yellow is the first thing to command your attention, after which you will notice the retro fridge (which does actually store the drinks for purchase) next to perfectly curated deli shelves and a table of baked delights. 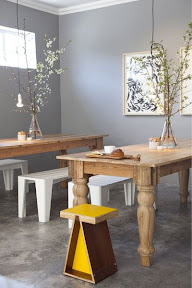 In the other direction you will see the two long tables with benches, which is pretty much all the available seating. Another indication that the restaurant aspect is secondary is that it couldn’t seat more than 20 people at a squeeze. Which also means that there won’t be much of a ‘buzz’. Behind the counter is the menu, written on the white tiled wall in black marker. It’s a limited menu with eleven options in total. The four breakfast options (available all day) are R25 and I actually think the scrambled egg and bacon sandwich is the best value item on the entire menu. The sandwiches are R45, I had the chicken and salad sandwich. It wasn’t bad, at least the ingredients and bread were fresh. Salads are R45 a plate and look interesting.

It’s counter service and not incredibly friendly. I don’t think they have a liquor licence which is no big deal as they are open between 8am and 4pm only (Mon to Sat). My experience at the Superette was cool, but as with most galleries, if you’ve been once, there isn’t much reason to go again.