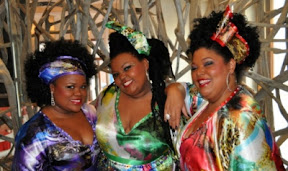 This review is a bit late to help you because tonight is the last show. But I’m sure the show will be on again soon and it also gives me an opportunity to talk about the new On Broadway.

On Broadway has moved to what was the old New Space Theatre next to the Grand Daddy hotel in Long Street. The theatre is upstairs and the restaurant is on street level where the old Time Out Cafe used to be. We ate at the restaurant before the show but I think I’ll review that separately because I think they want the restaurant to stand on it’s own and attract people who aren’t necessarily going to see a show at the theatre. But seeing as you’re so well behaved, I’ll tell you that the food is not bad and it’s really good value.

The theatre is a proper theatre, albeit small. It think it’s a nice upgrade for On Broadway as their previous venues were fairly makeshift with the theatre seating being restaurant seating as well. Now they can get more people into the show, I’m not sure how many it seats but maybe around 200 would be my guess. The seating is tiered so everyone can see and the seats are new and comfortable. While the theatre has been revamped (hence the new, comfortable seats), it is the original Space theatre from many years ago so it has history and character. It’s small but not too small and the sound, lighting, etc are all good.

The show, starring 3 Tons of Fun, is called An African Dream. Those of you who have seen 3 Tons of Fun in action before will probably know them for their disco numbers(like we saw at the Table of Unity), but this show is all about African music and you’ll be disappointed if you’re expecting disco. But if you’re expecting great music, with fantastic singing then you won’t be disappointed. This is not just three ladies singing to backing tracks, they have a four piece band performing the music for their tracks. The musicians are a great addition and it looks like they are really enjoying being in the show.

The Tons really got the audience going. In no time we were clapping and they had us on our feet even before the interval. A bunch of people ran up to the back and spent most of the time dancing and clapping up there. It was a feel good show and it certainly had me smiling. At R95 I think it’s good value entertainment.

An African Dream by 3 Tons of Fun is a great show, well worth checking out. And On Broadway is a lovely theatre, so I look forward to many good shows there.