Brio is in the old Riboville space and is owned by Lauren and Skippy who also own the Codfather in Camps Bay. It has a very different feel from Riboville. While Riboville was a large space with modern decor juxtapositioned against the old original wood paneling and marble walls, Brio embraces the old feel and the decor reflects the style and class of that era. Lovely chandeliers and ornate furniture combine to create a unique space. Some aspects remind me of the recently restored Casa Labia in Muizenburg. One might think that the space and decor would create a stiff environment, but it’s actually warm, welcoming and casual.

Brio is much smaller than Riboville was, which helps with the atmosphere. Where the sushi bar used to be is now a lounge (which can be used as a private dining option for functions etc) and on the other side is Liquorice and Lime coffee shop, so you can’t access Brio from St Georges mall side. The old bank manager’s office (which was a private dining rom, is now the smoking room with couches and a fireplace. The vault downstairs, one of the most interesting elements of this old building (built in 1893) is going to be used for something interesting apparently, but we’ll have to wait to see what that is as they are keeping it as a surprise.

The menu is quite short, with the mains consisting of approximately six meat options, six fish options, a chicken option and a vegetarian option. Prices are about normal for a smart Cape Town restaurant. A fillet steak with pepper sauce costs R136, or R116 without sauce. A burger with guacomole and bacon costs R79, and the whole baby chicken seems quite pricey at R149. We were in the mood for seafood and seeing as there is a connection to the Codfather, we thought we would give it a go. Instead of having the grilled calamari (R49) and steamed mussels (R58) for starter, then moving onto linefish (R118) and prawns (R189), we opted for the seafood platter for two (R600). They did twist convince us to have the deep fried camembert (served with rocket, caramelised macadamia nuts, figs and a balsamic – R62) to start. The starter was delicious, the fresh rocket cut through the rich camembert and the caramelised macadamia nuts were an interesting addition.

The seafood platter was really good. Grilled line fish, Mozambican prawns, langoustines, grilled calamari and crayfish all served in a bain-marie type dish with a flame below to keep it all warm. I hate it when seafood platters get cold half way through, so this method of serving is awesome. By the time you get to the bottom layer it’s all nice and hot. My partner doesn’t eat shell fish so I tucked into the nice big, firm prawns. I think there were about three of those. Then I moved onto the two langoustines (my favourite) before finishing off the lobster. I kept quiet while my partner was raving about the calamari and fish. I had some of the calamari and fish next (there was so much food we couldn’t finish it) and they were both really tasty, but I definitely got the sweet end of that deal!

The platter came with the house peri peri sauce which was lovely, hot but not too hot and very tasty. Great for dipping the chips in and adding some flavour to the rice (apart from lathering all of the the seafood obviously). We washed the meal down with a bottle of Glen Carlou Pinot Noir (R333) which was a perfect match. Sides like marrows or creamed spinach are around R25 each. 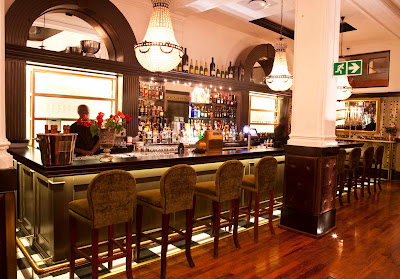 The wine list is quite expensive. While there are some option a smidgen under R200, most are well over that mark. So while the food is not unreasonably priced (although I would offer the seafood platter with the crayfish as an option to make it more approachable), the wine can make it an expensive meal. It’s probably worth taking advantage of the R40 corkage (for 1st bottle, R60 for more) if you plan to consume a few bottles.

For dessert we tried the Lindt chocolate souffle (R45) which was fantastic. It was super rich though, enough for two people easily. We also tried the mille feuille,(R48) described as fresh fruit and custard between layers of pastry. We weren’t blown away by it and left most of it while we focused on trying to overdose on chocolate.

What separates Brio from other restaurants, is that it is one of the few that offer live music and the option to dance. In fact, Skippy occasionally steals the microphone from the vocalist and surprises the patrons with some pretty decent singing. Skippy and Lauren are very friendly and welcoming, making one feel at home in their restaurant. All of this adds up to an experience which is more than just having a meal out. Dinner at Brio is an experience, and while it’s not inexpensive, it’s worth repeating.

They have a lovely bar, so if you feel inclined you could pop in for a drink and soak up the atmosphere and vibe without having to dine there. Cocktails are around R45 each.