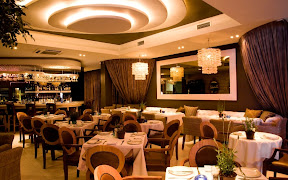 It feels like ages since I’ve written a restaurant review. This Waterfront blogging gig really took over. I have some negative reviews to share with you but thought I would start with a positive one first. We’re all struggling a little with post World Cup depression so we don’t need more negativity.

The Kove and Bungalow opened a while back, under the same ownership as Paranga and Pepenero. While Kove remains, Bungalow has been converted into an Italian restaurant called Zenzero recently. I was invited to come and check it out, which I did last night.

We chose the table closest to the faux fire, which in the end got the better of us and we had to retreat to another table to enjoy our desserts otherwise we would have overheated. While we perused the menu, our waitress brought us each a roll, accompanied by olives, chopped up tomato with herbs and some cubes of fresh parmesan cheese. It was all good quality stuff and a pleasant change from the plain old roll with butter.

Zenzero is open breakfast, lunch and supper. I had a quick peek at the breakfast and lunch menus. The breakfast options are fairly standard with an English breakfast going for R55 and omlettes ranging from R50 to R70. The lunch menu offers tramezzinis, also ranging from R50 to R70. The fillings are a bit more interesting than normal; the chorizo and artichoke caught my eye. I’m sure the dinner options are available at lunch time too.

For starters I was struggling to choose between the grilled calamari (R50), the beef carpaccio (R80) and the chicken livers (R40). The waitress steered me toward the carpaccio and it was pretty good. I thought the tomatoes were a little too strong in flavour, overpowering the subtle flavours of the meat, but there were only a few so it didn’t ruin it. My partner selected a salad, the rocket salad (R60) with pear, pine nuts and smoked mozzarella. The salad was great, but again the smoked mozzarella is really strong so it drowned out the pear flavours.

For mains I had the veal marsala (R120) and chose the parmesan mash as the side. It was delicious, and a generous portion. My partner had the salt baked trout (R150) with a side of roast pumpkin and mushroom. The salt crust hardens during baking, trapping the moisture in the fish. When they bring the dish, they crack the salt crust and remove it from around the fish. The waitress had some difficulty removing all the salt, so while the fish was fantastic it did surprise with some very salty bites. I notice she was careful to leave the skin on the fish, whereas the occasions I have seen this before, the skin sticks to the salt and they remove it so you are left with the exposed flesh of the fish.

The wine list is short and expensive, I eventually stopped trying to eeny meeny miny mo the cheap options (R200 and up!) and went for the Rustenburg X Merriman at R300 and it was awesome. I should select in that price bracket more often, but I really can’t afford to. There were not many options by the glass either. The wine definitely makes the meal expensive.

For dessert, which I was tempted to skip because I was so full (but forced myself for you), we had the lemon tart (R30) and the Zenzero chocolate cake (R35). The lemon tart was good but do yourself a favour and drive to zenzero now and order the chocolate cake, it’s amazing. No flour, just a stiff chocolate mousse cake made from Lindt chocolate. It is so smooth and creamy, and it reminded me of Aero, but made with Lindt. Wow.

Unfortunately the wine makes the meal expensive. The place is lovely, the service was excellent and the food is really good but it is pricey. For me to eat there, it would have to be a special occasion, but on special occasions I go to one of the many really awesome restaurants in Cape Town. So I’m not sure who their target market is. If they just had some special wines that were cheaper it would be a lot more accessible.