When a place has been around for a long time (more than 30 years in this case), you don’t really analyse it and review it, you just go there and tell people what it’s like. Vasco’s doesn’t care if you don’t like the place for some reason, eat there, don’t eat there, they’ll be around for another 30 years. 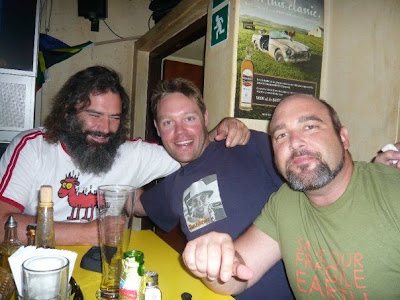 This attitude is manifested in the waitresses. They look like they have been there from day one and while a smile will cost extra, they know what they are doing. They won’t take any crap and won’t hesitate to glare at you or walk away with a shake of the head if you become too much admin. But the attitude won’t have you calling the manager (I doubt they have one), more likely it will have you apologising when she does her next round.

I’m not a fan of taverns, I find them to be grimy and smoky and the food is usually average. Walking into Vasco’s was a refreshing surprise. It was clean and surprisingly smoke free even though there were some people smoking. The decor is typical of a Portuguese tavern, with the usual paraphenalia and sponsored branding. The place is not big at all and I imagine it’s difficult to find a table most days.

There were five of us, three of us had the peri peri chicken (R46.50 – half chicken) and chips, one had the calamari rings and tentacles combo (R65.50) and one had the beef trinchado starter (R49.50). Early arrivers also shared a chicken livers starter (R29.50). Everything received a healthy splash of the peri-peri sauce from the bottle on the table (be careful, it’s not for the faint of tastebud). I enjoyed the chicken, the trinchado sauce was tasty and the calamari was deep fried. Typical Portuguese fare which I don’t think has changed in 30 years, no surprises, no disappointments. Apparently the espetada is tip top.

I neglected to peruse the wine list, but a glass of house red cost us R14.

Apparently they are only open until early evening and I hear they are popular for business lunches. There are some TVs for those that want to watch sport, but it’s a small place so I imagine it would get quite crowded. I’ll certainly be back.