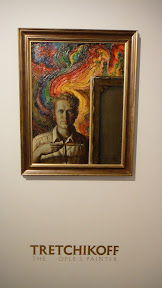 I’m embarrassed to admit that I have only visited the National Gallery about four times in the ten or so years I have been living in Cape Town. The first couple of visits happened within the first few years of my arrival in Cape Town, they are a distant memory. But the most recent visits will stand out in my memory for a long time. Last year I was impressed by the exhibition entitled 1910 – 2010 From Pierneef to Gugulective: A Fresh Look at a Century of South African Art. But this year I was totally blown away when I went to view the Tretchikoff retrospective entitled Tretchikoff: The People’s Painter.

You don’t have to be a genius to deduce that Vladimir Grigoryevich Tretchikoff was born in Russia, but he left before he was ten and after living in many countries, he settled in South Africa when he was in his thirties. He died only recently (2006) at the age of 92, so he lived most of his life here and his family is still here.

In fact, when I went to view the exhibition, his granddaughter, Natasha Mercorio, showed me around. Which was something very special as she shared information about her memories of her grandfather and other interesting things which I did not know.

He was called the people’s painter because people loved his art, while the critics were, well, critical. He had no formal training, which might be why the critics were a bit unhappy about his success. He was also the first artist to make his works available as inexpensive prints and hundreds of thousands were sold, making him a wealthy man. Everywhere he exhibited, the crowds flocked, despite the critics. And this exhibition has been no different, the National Gallery has seen record attendance. 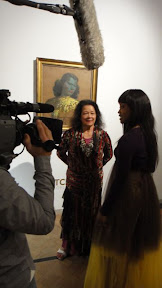 The launch of the exhibition was made extra special, not only by the attendance of Tretchikoff’s close family but also the model that posed for one of his most famous paintings, The Chinese Girl. The exhibitions boasts over eighty Tretchikoff originals, about twenty of which were brought from overseas collectors. This is no mean feat considering the most recently auctioned (a few years ago) Tretchikoff original was sold for over R3m!

So this exhibition is a special treat with paintings spanning a large proportion of his life and representing a variety of styles and subjects that he utilised. I did not know that his pieces were so varied, nor did I realise how well known they are as I recognised many of them. Whether you like his art or not, the exhibition is a must see.

The exhibition runs until the 25th September at the National Gallery.