I was a bit surprised to find myself back at the Theatre on the Bay so soon. I’m quite selective about which plays I watch so after seeing Not The Midnight Mass recently, I thought it would be a while before I was tempted back again. 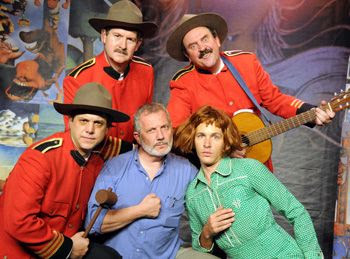 Then I saw that Pythonesque was showing and it looked like it could be quite fun so I went to see it with a group of friends. I’m not the biggest Monty Python fan, I’ve only seen some of their material and I’m not the type of person who watches things over and over again so I don’t remember what I saw in great detail. I do remember finding it quite amusing and that’s why I went to see Pythonesque.

I found the performance enjoyable, but I suspect that if I was more familiar with their material I would have enjoyed it more. Pythonesque is not a rendition of Monty Python’s best skits, in fact they did not reproduce any skits. It is the story of Monty Python’s origins and history told in the Monty Python style, ie. through a series of zany and humorous skits. There were obviously allusions to many of the well know Monty Python skits, but no direct reproduction.

I think they pulled it off quite well and it certainly helped that the guy who acts as John Cleese looks like him and does an excellent job of imitating him. The show was both entertaining and informative. I’d recommend it, but mainly for fans of Pythonesque humour, if you’ve never watched or enjoyed Monty Python, you might not get the surreal humour.

You may not be aware that they have a restaurant at the Theatre on the Bay and you can order a 3 course meal or just a la carte. If you are having multiple courses you can have dessert during the interval. They also offer Death by chocolate cake including a cup of coffee for R14. That sounds like a great little way to end an evening at the theatre if you ask me!

The other thing I like about Theatre on the Bay is that you can take your drinks into the theatre, which means you don’t have to down your interval refreshments when the bell goes (unless you’re looking for an excuse).