I’ve eaten at Ginja and Shoga several times, so am familiar with Mike Basset’s good work. I’ve been hearing good reports on Myoga for the last six months or so. I also popped in when I was in the area and was really impressed with the decor. So my visit to Myoga had the potential to be a fantastic dining experience. But it wasn’t.

I did go and try the special (R150 for 6 courses, R225 if paired with wines), which is good value as two courses would normally set you back nearly R200, so perhaps it is not a true indication of the offering. I also acknowledge that arriving as a party of 30, might have put some strain on the kitchen and staff. They did say it was the busiest night they have ever had. But, having said that, we were seated at 4 separate tables and each table was served independently. In fact the first table was into their second course when my table was still placing orders, so I don’t believe we posed any greater challenge.

First impressions were great. We enjoyed apperitifs in the ante room while the tardier members of the party trickled in. Then we were seated and I enjoyed looking around at the interesting decor which cannot be ignored. The kitchen demands a mention as it is well designed and integrates into the decor to create an effect which I found very appealing. The bathrooms are amazing, very different and modern with video screens showing what’s happening in the kitchen which I thought was novel and quite cool. The bathroom was surprisingly dirty though.

Once we were seated, the evening changed tracks and veered sharply toward annoyance, stopping at the station of frustration on it’s way. By the time we were seated it was getting quite late and we were getting quite hungry, so waiting 20 minutes for the first sign of service did not go unnoticed (forgivable, considering there were 30 of us). Our first service interaction immediately changed my mood from appreciation to annoyance as it was to offer me a choice of still or sparkling water, which was imported from Italy. I cannot accept restaurants defaulting to imported water when we have excellent local waters (in fact bottled water should not exist at all, but you can read my thoughts on that here). I requested local water and was mildly pacified when they brought some. I can understand restaurants stocking some imported water for those difficult customers that occasionaly turn up, but offering it by default is unacceptable.

Anyway, another 20 mins later we placed our order (you can see why one of our tables was on their second course by now) and most of us went for the special paired with wines. Another 20 minutes and the food started arriving, this is the set menu for the special:

The food was actually really good, mostly. I loved the black pepper tartlet, loved the soup, the linguine was ok (a bit cold), but the chorizo was great. I didn’t like the palate refresher, but that was only a brief mouthful anyway. I had the beef which was excellent and way better than the fish with its undercooked risotto. The dessert was good and bad, I loved the icecream and wasn’t mad about the sponge which lacked flavour. 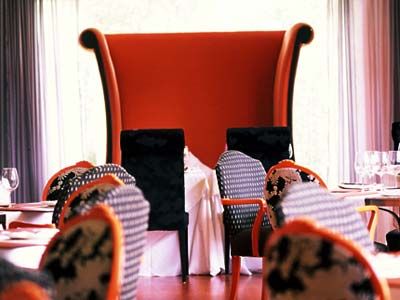 So, had everything gone smoothly, I would have been very happy with that meal. But the service managed to turn it into an exercise in frustration. The paired wines seldom arrived with the food, and often didn’t appear till after we had completed the course, if at all. One of our tables was on their third course before they received any wine! For a pairing, this is unacceptable. As for the wines, they were all from one estate which I can’t remember. The whites were not bad, but the reds were not pleasant. I left the reds and drank the glass I had ordered earlier in the evening.

Apart from the timing issues, we had one waiter who seemed determined never to look at the plate he was presenting. On three occasions (at our table, can’t speak for the others) he managed to dip the serviette he was carrying into the plated food and then smear it across the plate, converting a well presented dish into something quite unappealing. He never noticed because he never looked at the plates.

On the positive side, the waiters were friendly and eager to please, although not really able to. Perhaps it is not fair to rate Myoga on their busiest night. But it is certainly not fair to promise me a 6 course wine pairing  and give me six courses with random wines, while making me wait so long that the meal ended after midnight. What did I do to deserve that?

I liked the space and the food was mostly excellent, certainly interesting enough to hold my attention. It was a shame that the lofty expectations I had were not met. So I will go back again, on a quieter night and hopefully have the experience I am promised. I suggest you visit too, the special is good value even on a busy night.