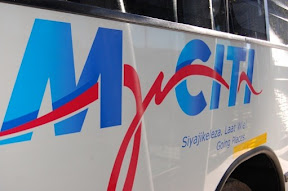 The other day I used the MyCiti airport shuttle for the first time and I was so impressed, I felt I should share my experience with you. I purchased my ticket at the Civic Centre station and boarded the waiting bus. Within twenty minutes I was inside the airport terminal. I could not believe how quickly we arrived at the airport, but it was late morning so traffic was minimal. I assume if you use the service at peak times you will have to plan for a longer trip. Also, I happened to board the bus as it was about to leave, but if your timing is off you could wait up to twenty minutes before departing as the buses leave at twenty minute intervals.

On my return trip, I purchased a ticket at the airport station and waited about ten minutes for the bus to depart, arriving in town about twenty minutes later. The tickets are R50 one way and there are discounts for groups (R40 for 20 or more, valid for 3 months) or you can buy a ticket which allows unlimited trips for a month (R400). A taxi would cost about R200 from the Civic Centre to the airport (roughly 20 kms).

The buses themselves are brand new. They are comfortable and airconditioned (see photo below). The staff were friendly and helpful. Overall it was a professional and pleasant experience. It really matches (or even exceeds) similar services in other countries.

One of the problems with the service is that you have to get to the Civic Centre or from the Civic Centre to your destination which can be tricky and depending where you are going to / coming from, a little expensive.

The service is not being used much. There were five of us on the trip out to the airport and ten on the trip back into town, so it is being used but it should be much more popular. I think part of the problem is that many people still don’t know about it, so let’s hope they read this post! I often have friends ask me to take them to the airport and from now on, I’m going to just drop them at the Civic Centre and they can catch a bus to the airport. That saves me nearly a round trip of nearly an hour, not to mention the fuel cost. 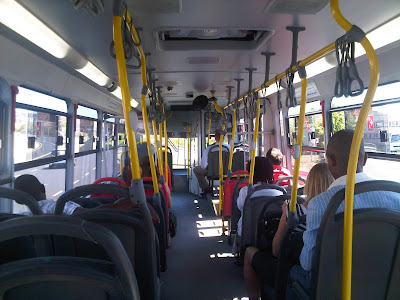