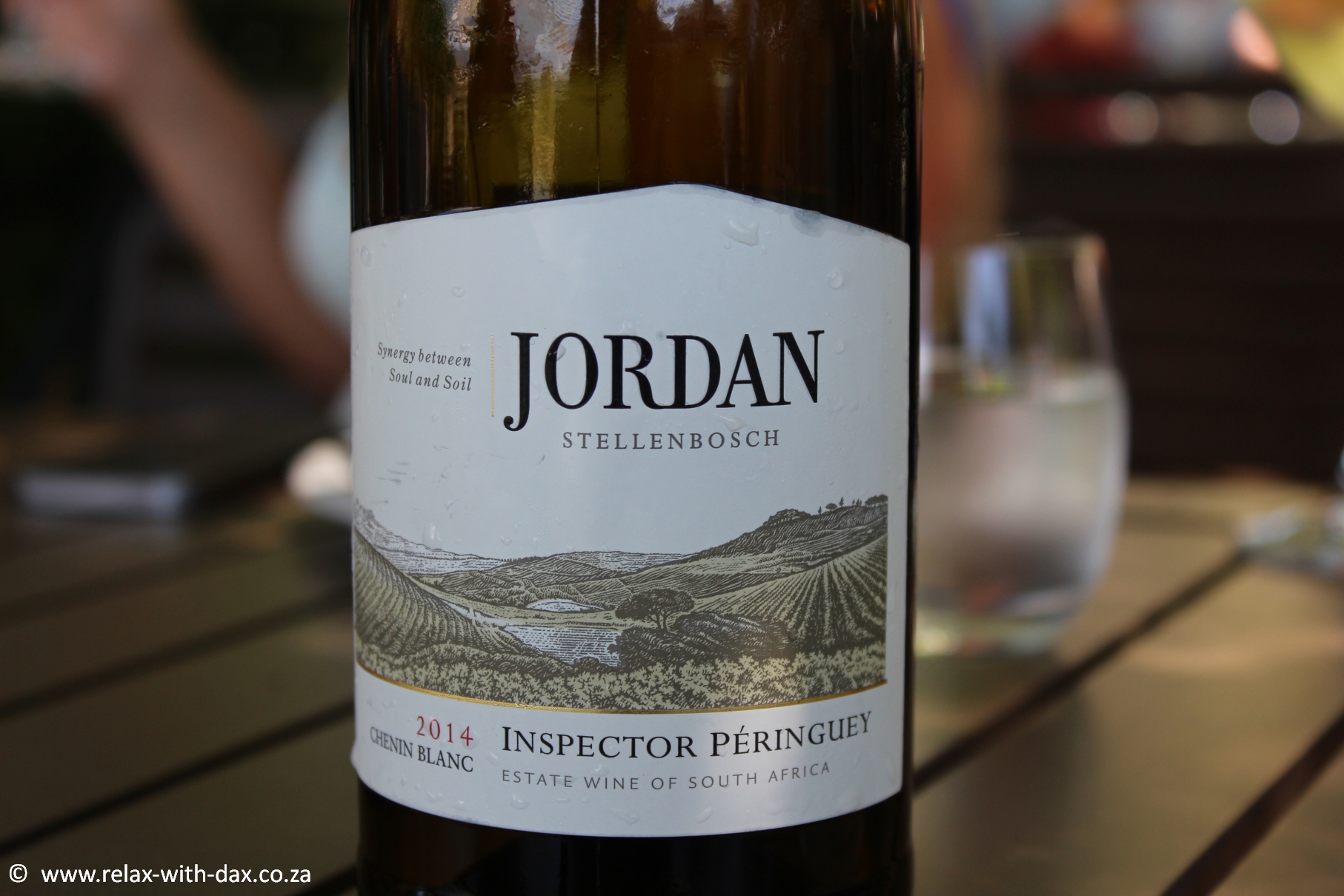 My first intersection with Jordan wine estate happened before I had even moved to Cape Town, which was 15 years ago. I was a university student, living in Durban and was spending some of my summer holiday in Cape Town with some friends. In those days I understood as much about wine as I understood about women, very little (ok, nothing). We had been wine tasting all day, as one is able to when one is young, and my inexperienced palate was feeling quite abused by that stage. Jordan was our last stop for the day, but I was quite keen to sit this one out. In those days we each had about 5 rubber arms so it took my friends all of 30 seconds to bully me into tasting the wines. I was blown away, the smooth, silky cab washed over my jaded tongue like a healing elixir. I can’t tell you which other wine farms we went to that day, but Jordan was etched in my mind.

Which is why, when several years later I was asked by my employers what my favourite wine was, I said Jordan cabernet sauvignon. I was moving to a new job and they wanted to thank me for my (not very long) service by buying me a bottle of nice wine. Well, I thought they were buying me a bottle but to my delight, they bought me a case. That case was the highlight of my wine collection at the time. Actually that case was about 90% of my wine collection at the time. I purchased some cheap wine for my less discerning friends (the vast majority) and the more discerning would be treated to a bottle of 1998 Jordan cab.

Over the course of a few years, the case dwindled down and my understanding of wine improved (but I still don’t understand women). Finally I was left with just one bottle. It became my most prized bottle in my wine collection, which had now grown to be much more substantial. My friends had also become much more discerning but my wine collection now had the depth to cope with the demands put on it and there was no need to bring out that last bottle of Jordan cab. I had in fact become quite attached to it. I ‘m not a very sentimental person but this bottle of wine seemed to represent so much and was a reminder of how far I had come and the good times I had enjoyed along the way.

That bottle of Jordan cab enjoyed pride of place in my wine cellar (sorry, cupboard) for a few more years. We must fast forward to the year of the Soccer World Cup to pick up the story again. I have always shared accommodation since I moved to Cape Town. I enjoy the company and it saves me some rent which I can then spend on wine. At the time I was sharing my apartment with a friend. Let’s call her Donna, because that is her name. Donna had many great qualities, but she had one quality which was not so great. She was incredibly scatterbrained. I mean seriously scatterbrained. I had never met anyone that ditzy before, and have not since.

All of my flatmates have stuck around for 2 years or more, I guess it’s because I’m so awesome to live with. Donna was the exception, thanks to that bottle of Jordan, she had to move out. The story of how that came about it still difficult for me to tell, but I will do so nonetheless. I received a text from Donna one afternoon, which said something like:

At this stage my wine collection was probably standing at 50 or 60 bottles, all of them quite easily replaceable, if at a price. There was only one which was irreplaceable, a certain Jordan cab tucked behind some other bottles. I think you know where this story is going. The next day I checked the cupboard to see what Donna had selected. More out of curiosity than anything else (ok, ok, I’m a little OCD). There were no obvious gaps in my neatly stacked rows, which meant… No! Please tell me she didn’t take my 1998 Jordan cab! Surely she would not select the one bottle that was older than any other bottle by probably a decade? But after a thorough search, it was evident that my precious bottle of Jordan was indeed gone.

I called Donna out of her room. She had still been sleeping so when I asked her which wine she had taken she hesitated while she tried to recall. I said, “was it the Jordan?”. To which she responded, “yes, that’s it!”. I asked her why she would choose a 12 year old bottle of wine, and she said, “12 years old? I thought it was a 2008?”. No Donna, that would be 1998. She apologised and said she would find a replacement no matter the price. I didn’t have the energy to explain that the chances of finding a wine that old on the shelf was probably zero. Or maybe I thought that would be a good punishment, her having to drive all over the city trying to find a wine that won’t be found (I can be quite nasty sometimes).

So then I asked her if she had at least enjoyed my special wine, “was it drinking well?”, I said. She said that she didn’t know, as she had gone to a braai and had just put the bottle on the table with the other wines and drank whatever was open at the time. So I don’t know who got to drink my last bottle of 1998 Jordan cab. I have to tell myself that there was someone at that braai, a wine aficionado, who spotted the bottle and enjoyed it. And I hope they drank it with good food, not just a boerie roll with hot Mrs Ball’s chutney. And I hope they drank it out of good stemware, not a polystyrene cup. And I hope they took a moment to appreciate it, to enjoy that smooth, silky cab.

For a long time that was the end of my story. It’s a story I’ve told many times. It’s not a Hollywood story, there is no happy ending. Donna eventually replaced my 1998 Jordan cab with a bottle of 2008 Andreas shiraz. A delicious wine for sure, but a hopelessly inadequate replacement. I have a suspicion that she bought it at the first bottle store she stopped at. She moved out soon after (sorry, Julian, I should have warned you!). The lesson I learned from this story was to be even less sentimental. Sentimentality makes things too valuable. I should have enjoyed that wine long before then.

But the story has a new chapter. We need to jump forward another 4 years. I was attending the 2014 Green Wine Awards, sitting next to my friend, Thea, who was sharing with me her good news. She had just started her new job as marketing manager for Jordan wines! So of course, I told her this story. Even though a long time has passed since it happened, Thea could still see the sadness in my eyes as I imagined that bottle of Jordan cab on a plastic table at somebody’s braai. She commiserated with me and we drank some of the delicious wines that were in front of us and we toasted to her new job and the fact that the 2013 Jordan Chameleon sauvignon blanc / chardonnay had just won the award for best value among the BWI entries.

I heard from Thea later that week, unexpectedly. It was about 6pm and I was at the opening function for Bocca, the new restaurant on the corner of Wale and Bree Streets. I took the call from Thea and she wanted to know where I was because she needed to come and see me. I wasn’t sure what was going on, but the function was quite casual so I told her to come and join me. She arrived a few minutes later, carrying a Jordan wine bag. She said, “this is for you, I think you know what it is”. But she was wrong, I had no idea what it was. I think my brain was slowed up by all the good wine that Neil Grant had been serving us at Bocca. Thea looked at me and smiled, and I suddenly put 2 and 2 together. I said, “don’t tell me this is a 1998 Jordan cabernet sauvignon?”. She confirmed that it was exactly that. A gift from Gary Jordan, from his private cellar, to say thank you for the great story.

I’m not embarrassed to admit, I was a little emotional. Must have been that damn sentimentality. What a special gift. A thoughtful and generous gesture. It came with a hand-written note which said, “We loved the story! Enjoy the wine and let us know how it’s drinking!”. So now I have to be careful because I’ve put that bottle on the shelf and I’m starting to see it as too special to drink. But I must learn my lesson! I promise that I will drink it before the end of the year. I think I’ll buy some of the recent Jordan cabs and do an interesting vertical.

So that’s a much better ending to my story. It feels more complete which is why I wanted to share it. I hope you enjoyed the story. A big thank you to everone at Jordan for making great wines, and particularly Gary, Kathy and Thea, for being awesome.