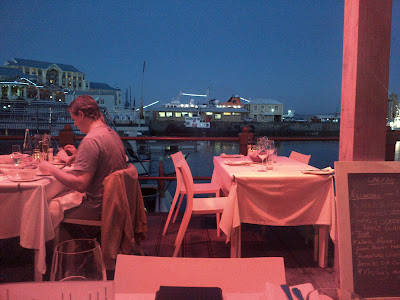 I attended the opening of Harbour House in the V&A Waterfront a few weeks back and I could tell straight away it was going to be a popular spot. I wasn’t wrong as I went to try it out on a Monday night recently and it was packed. Admittedly it is December and most restaurants in the Waterfront were packed but I think it definitely belongs in my Top 5 Waterfront Restaurants.

If you’re a fan of Harbour House in Kalk Bay then you are likely to be pleased with the new one as the menu and wine list are exactly the same. There is a also a fabulous view of the harbour (not quite as fabulous as Kalk Bay, but fabulous nonetheless). My dining partner described the decor as ‘riverside chic’. I don’t really know what that means but apparently those in the know will. The external walls are all glass, affording a good view of the harbour on one side and the hustle and bustle of the Waterfront on the other. The floor, beams, pillars, etc are all made of wood as are the chairs and tables. The chairs are white and the tables are covered with white tablecloths, creating a crisp, clean, chic look.

We started at a table outside which was great until the sun set and the heaters could no longer hold back the cold wind. Fortunately a table became available inside and we enjoyed our mains and dessert there. Service was friendly and capable, by a Zimbabwean gentleman named Sunshine. 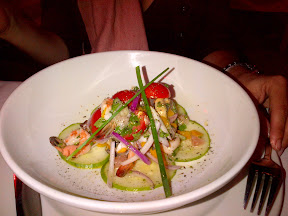 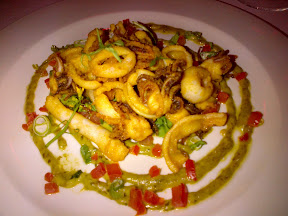 I had the tuna nicoise (R155) main, which was a seared tuna steak served with boiled baby potatoes, green beans and anchovy mayo. My dining partner had the yellowtail linefish (R135) which came on a bed of spinach with a beurre blanc sauce. We were both pleased with out dishes. 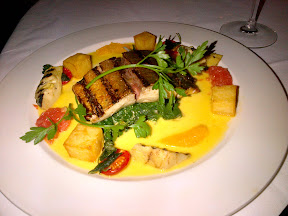 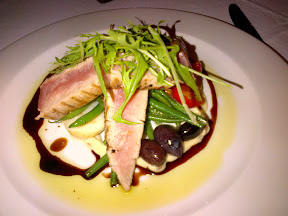 Dessert was definitely the highlight though. We struggled to choose as the waiter recommended the traditional creme brulee, but everything sounded so good. We finally chose the New York style baked cheese cake with cinnamon ice-cream which was unbelievably good. Seriously, if you’re a cheese cake fan, put this on your list. The cinnamon ice-cream was also legend. I had the caramelized lemon tart with chocolate ice-cream. Also fantastic, although I’m not convinced that chocolate is the best flavour ice cream to pair with the very rich tart. I might have served it with something a bit lighter, like a melon sorbet or something. 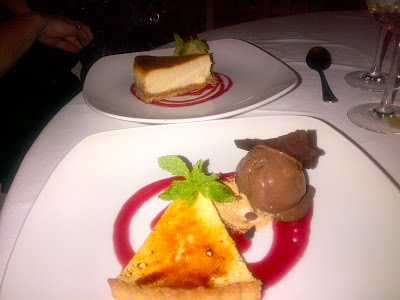 The place was buzzing, so there was a great atmosphere. We arrived at 8pm and only left at 11:30pm. We popped upstairs to the bar afterwards but it was closed. It looks like a great spot for drinks and maybe some sushi. Overall, a great addition to the Waterfront.