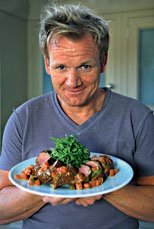 There was so much more to the Good Food & Wine Show this year. More than likely it had a lot to do with the involvement of the BBC Lifestyle chefs. Cooking shows have really caught on in South Africa, so when you mention names like Georgio Locatelli, Willie Harcourt-Cooze and Gordon Ramsay, everyone knows what you are talking about.

The cooking demonstrations by these chefs definitely seemed to be the focal point of the show for many people. On the day before the show we had a media meet and greet with the chefs so I sent my food advisor because I thought she would get more out of it than I would. She did chat to a few of the chefs, but it seems her questions revolved mainly around whether they were married or not. It seems being good looking and able to cook is a magnet for women. I think I see where I’m going wrong.

The show itself was entertaining. That’s if you consider parking in Seapoint and walking to the ICC entertaining. It seems the celebrity chefs really attracted the crowds so the show was packed every day. I went on the Thursday partly to try avoid the crowds, but mainly because I was one of the judges of the stands. We spent some time walking around trying to choose the best stands and products. I really liked the mini market they did in conjunction with the Stellenbosch market (my favourite market). The feedback I heard from people about the show was quite positive. It was definitely something you couldn’t do in a hurry, to do it justice would take most of the day.

On the Friday night I was invited to the Gordon Ramsay charity dinner at Maze. It was a black tie affair and tickets cost R1500 each for a five course dinner prepared by Gordon Ramsay. The food was similar to my last experience at Maze, a mixture of highlights and disappointments. We really only saw Gordon Ramsay for about two minutes at the beginning of the evening, then he disappeared into the kitchen and from what I hear, left soon thereafter. Some people had paid for tickets, and flown from other cities and stayed in hotels in order to attend this ‘special’ evening.

I don’t know who was to blame for the disappointment but it certainly tarnished the names of all involved. I’m sure by next year people will be over it and I’m looking forward to seeing what the Good Food & Wine show is going to do to improve on this year.