I heard that Goldfish was performing at Spier this weekend, supported by JacSharp. I felt I should be there, for several reasons:I haven’t been to the Spier Amphitheatre for several years, I haven’t seen Goldfish in action for a while and I wanted to see JacSharp again after enjoying them so much at the Chevelle launch. I am away this weekend (leaving just now), so I was happy to see that they were performing last night too. I grabbed a posse and sped out to Stellenbosch.

What a show! We found our way to the ‘courtyard’ by following the sounds of JacSharp in action. I grabbed a sneaky boerie roll while no one was looking, then made my way over to the bar and got myself a beer to wash it down. Then I was ready to pay some attention to JacSharp. They were a little understated compared to the Chevelle gig, which is probably a good thing considering the difference in venue. Watching them in action confirmed that I like their new vibe. I will definitely be making a point of checking them out more often. The play at Daddy Cool on Thursday nights and Baraza on Wednesday nights, both gigs are free of charge so I recommend you treat yourself.

Then it was time for Goldfish, so after a quick bar visit to organise a bottle of red wine, we ambled over to the amphitheatre. On the way to Spier we had been chatting about Goldfish and someone said that they had seen Goldfish live so often they were ambivalent about coming. Well, five minutes after Goldfish started playing that person turned to me and said, “wow, this is amazing, I’m glad I came”. Let me explain to you why she said that…

We cruised into the amphitheatre and found our seats. Sitting down for Goldfish was a bit disconcerting, but we were all standing withing 2 minutes of the start. It was nice to have your own space so you weren’t bumped and you could see the stage well. The stage was amazing, they had huge screens behind them with rad visuals as well as screens all around the ‘DJ box’ with additional visuals. The lighting and sounds were top notch. Everything looked very professional, you can tell why they are doing so well overseas.

When Goldfish plays live, they don’t just play the tracks from their CDs, they remix everything so each show is different and they get into the music with the crowd. Last night they had the guys who did the vocals for the albums there, which added another element to the show. While you’re watching the show, if you can tear your eyes away from the stage, look up and enjoy the stars. There’s something special about open air concerts, although it does get cold so take warm clothes.

Tickets are available from Computicket and range from R85 to R125. Show starts at 7pm.

I took some pics with my phone, but obviously they didn’t come out very well. I’ve attached one below just to give you an idea of what the stage looked like. 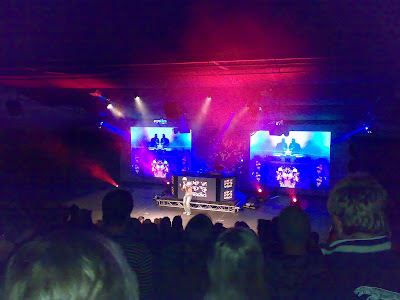