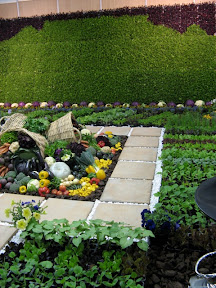 This last weekend I popped into the From the Earth Expo at the ICC. It’s was quite strange because the last time I was there was for Winex and the hall was no longer filled with tons of stands offering wine tastings, but filled instead with animals! It smelt like a farm in there. They had sheep, emus, ostriches, chickens, bulls, goats, alpacas and more. They really did bring the farm to the city.

I wasn’t sure before I went, what exactly the From the Earth Expo was meant to be about. When I got there I was handed a brochure which explained it.

With the 2009 From the Earth Expo, Agri-Expo presents visitors with this unique concept of bringing everything that is homemade, healthy and natural right to your doorstep.

There were several elements to the expo, you could taste foods and wines, shop for veggies, nuts, and all sorts of goodies. There was the animal section, which was interesting and especially great for kids. They also had several demonstration and presentation areas as well as a food court for those needing something more substantial than tasters.

We didn’t check out any of the demonstrations, but we did do some shopping and lots of tasting. I bought some mushrooms, leeks, potatoes, biltong, nougat and cheese.

It was interesting chatting to the producers and learning about their produce. Things always seem to taste better when you know that the producer is passionate about what he does.

We probably spent about two hours tasting, viewing, chatting and buying. Quite a nice afternoon I think.