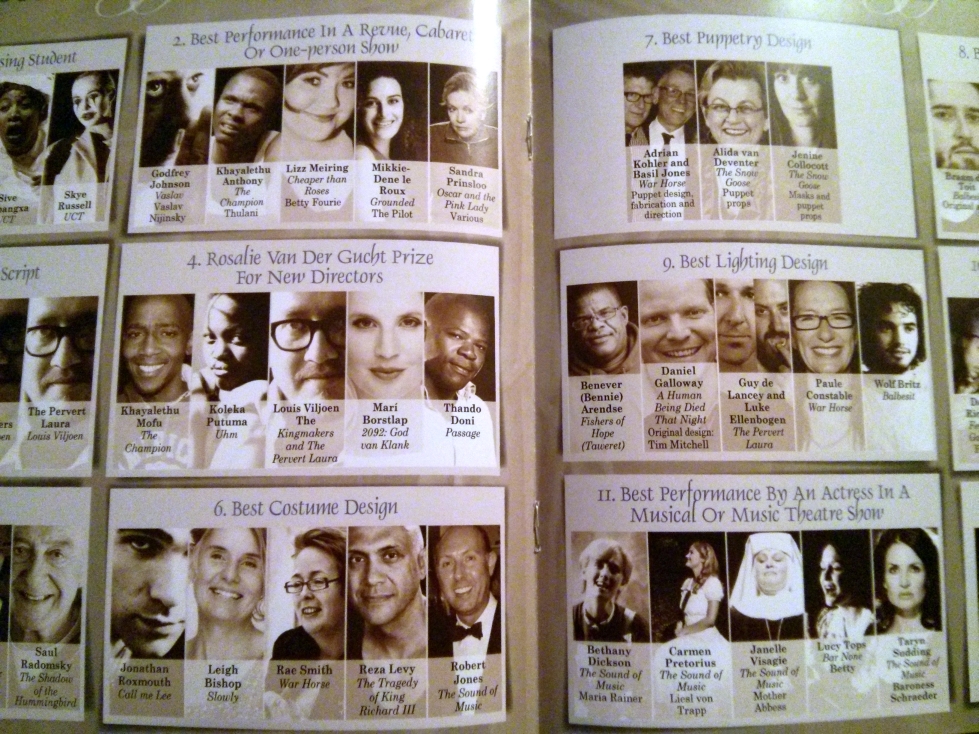 I was a little bit nervous about attending the Fleur du Cap Theatre Awards. I had never been before and I’ve been to some very boring awards events, for example the Veritas Awards and the SA Olive Awards. But it’s theatre, surely they will make it entertaining? That they did.

This year was the 50th year of the awards, which is quite something. Held at the Artscape Theatre, if nothing else, it was going to be a glamorous affair. We arrived to walk the longest red carpet I have seen in a long time. As I expected, everyone was dressed in their best and looking fabulous. There was definitely a lot of quirkiness though, as you can image, what else would you expect from actors? Unfortunately I didn’t make it into the socials, so you can’t see how fabulous I looked and how hot my date was.

We accepted a glass of champagne and tried to act nonchalant as we consumed more than our fair share of the delicious mushroom empanadas that were being offered around. In various parts of the foyer were actors performing skits. It was very arty stuff, I didn’t understand any of them but they were certainly interesting to look at.

Then it was time for the actual awards so we filed into the auditorium and the show began. I call it a show on purpose, because in the end it was a show and an entertaining one at that. The awards just formed part of it. I thought the intro was very clever, they showed the full depth of the stage (it’s enormous!) and showed off various props and stage mechanics as the master of ceremonies made his way to the front of the stage. It was done very well.

The MC was Alan Committee, who was excellent. He’s really funny and he handled the proceedings well, even when things went a little (ok, very) wrong. In between handing out awards we were entertained by actors doing skits, musicians playing some South African hits and Alan making us laugh. The time flew and next thing we knew all the awards had been handed out.

I have to admit that I recognised none of the award winners, probably because I had never seen any of the shows mentioned. I really should get to more theatre, I tend to stick to the big stage productions these days. Which reminds me, I did know about the guys from the Handspring Puppet Company which made the horse puppets for Warhorse. What would have really enhanced the whole thing would have been short segments showing the winning actor doing some acting in one of their shows. It would have created a much stronger connection between the audience and the award winning actor.

Then the party started! There was food galore and an open bar and a band playing. We enjoyed ourselves, ate some of the delicious food and chatted to some people that we knew and when we left at about 11pm the party was still going strong.

In the end it wasn’t a boring awards event at all, in fact I hope I get invited again next year! And I have to say that I think these awards are so important. A career in the arts is never easy, and a little recognition goes a long way so it’s great to see the hard work of all the nominees being acknowledged and that the winners are being rewarded.

Here are the winners: