The format was a series of presentations by food personalities and finally a panel discussion involving influential foodies. The tone was set when the first speaker took the stage. Luke Dale-Roberts, Eat Out’s 2011 Chef of the Year and chef owner of The Test Kitchen (revealed as SA’s top restaurant the following evening and 1 of only 2 SA restaurants currently in the World Top 100) and The Pot Luck Club. He started by showing us an awesome video of a day at the Test Kitchen. His presentation was about his passion for food and the artistic side of it. He spent some time talking about what inspires him and the process of creating the dishes we see. He then showed some short videos revealing how some of his dishes are made. Luke’s presentation was heartfelt and interesting, his delivery was casual and quite humorous. It was a very special treat to be in the audience.

The next presentation was by Dominic Davies, an international food photographer who did the photography for Heston Blumenthal’s cookbook, The Fat Duck. He showed some of his photos and explained how he did some of them. Very inspirational, considering he was originally a fashion photographer. It apparently took 9 months to shoot the photos for Heston’s book! The photos are unbelievable, I suggest you visit his website and take a look.

We then heard from Andrew Stellitano, a London-based food designer, who has worked on projects for the likes of Gucci, Louis Vuitton and Nike. He showed us some of his food designs and shared the story of how he became a food designer and what projects he is currently working on. Have a look at this picture below. It may not look like it, but it’s an edible tiramisu cake! 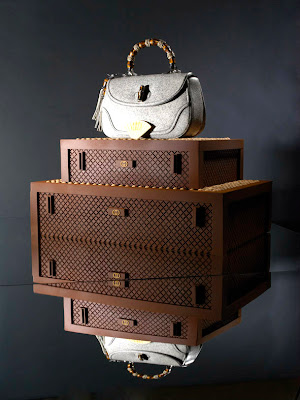 After the coffee break was a presentation which had half the audience in tears (including myself). Margot Janse (chef at the Tasting Room, a Eat Out Top 10 restaurant and the other SA restaurant in the World Top 100. Margot was also recognised as Eat Out Chef of the Year the next evening) gave a presentation on what she loves about living and cooking in Africa. She shared some amazing stories about the provenance of some of her ingredients and revealed the charitable work that she does from her kitchen at Le Quartier Francais, an example to everyone of what can be done. 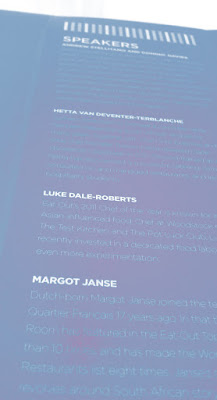 We then learnt about the amazing food history of South Africa from Hetta van Deventer-Terblanche, culinary consultant to Pierneef restaurant at La Motte, among other things. Hetta has been researching South African recipes for many years and informed us that we have a much richer food history than bobotie and potjiekos! Interesting many of the ingredients and trends which are so popular today are evident in historical records of our food culture.

Lunch was provided buffet style at Thirty7 in the Westin Cape Town. I think they went all out because the foodies were there. I’ve never seen a buffet look that good. and the dessert selection was great fun.

Then came Massimo Bottura. Chef and owner of Osteria Francesca, voted the 5th best restaurant in the world. Massimo shared some of the history of his region in Italy and then elaborated on how he pays homage to that heritage in his restaurant today. Truly inspiring content which made it easy to believe his restaurant is number 5 in the world.

The last session was a panel discussion featuring Abigail Donnelly (editor of Eat Out magazine), Giorgio Nava (restaurateur), Nick Thorogood (MD of Food Network EMEA), Reuben Riffel (chef) and Steve Maresch (founder of The Local Grill) in Johannesburg. The topics of discussion ranged from grain fed vs grass fed beef, to restaurant no-shows and everything in between). It was an interesting discussion which could have carried on for a few more hours at least.

Considering it was the first Eat Out Conference, it ran amazingly well. My only complaint is that the tickets were too expensive at R1000, but I was told that they will be cheaper next year.

If you have any interest in food, restaurants or chefs, you must attend next year. It will be worth your time and money, and you’ll get to mingle with top chefs and food personalities (like me, haha!). 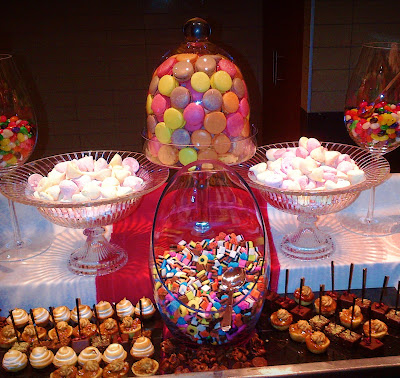