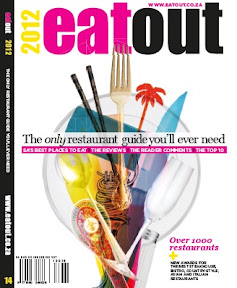 It’s safe to say that the Eat Out Awards is the highlight of the event calendar in Cape Town. Tickets are R1000 each but sell out well before the event and it is attended by about 350 people. I keep calling it the Food Oscars and I still think that’s a good way to describe it. The who’s who of the food industry are all in attendance, all the guys are looking debonaire and all the ladies are looking glamorous.

There is ample time to grab a glass of champagne and network and meet food personalities and well known chefs. You don’t want to be eating out on this night as all the best chefs are at the awards! The time comes soon enough to be seated in the huge function room (this year the awards were held at the Bay Hotel). The attention to detail is evident. The tables are beautifully set and there’s a buzz of approval over the bottle of Johnnie Walker Black Label provided at each 10 seater table.

The guests chat to their dining partners at the tables before the MC, Riaad Moosa, welcomes everyone with some stand up comedy. I’m at table 1, with Abigail Donnelly. I’m not sure if that makes me important or Abigail just wants me where she can keep an eye on me.

We are served some top class wine and the speeches begin. They are entertaining and interesting. There is much laughter and applause. Then it’s time for the first course. The four courses are each prepared by one of the top chefs in South Africa. Just before the dishes come out, the giant screens show the chef giving a demonstration of how the dish has been plated. Hideki Maeda of Nobu has prepared the starter of baby spinach salad with dried miso and crayfish. Everyone laughs a little at his endearing accent, but mostly they find themselves suddenly very hungry. The starters are rapidly deployed and the room quietens down as we all tuck in. 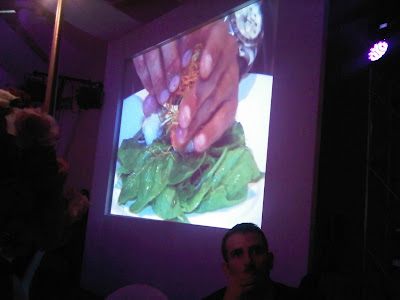 Each course is followed with some more entertainment from the MC who makes us all laugh by being obviously unfamiliar with the fancy dishes on the menu. There are more speeches and half the bottle of Johnnie Walker seems to be missing. That might explain why things are getting a little louder.

Luke Dale-Roberts appears on the screen to show us how he plates the second course, a ballotine of rabbit & gammon, duck liver purée, red cabbage crumbs and relish and jelly made of Everson’s pear cider.  Fabulous food, awesome wine, 350 foodies are in their element. Everything is running smoothly.

It’s time for some awards. This year there are some new awards for specific categories. Abigail explains the new awards before announcing the first winner, best bistro. We all nod approvingly as she announces: “Bizerca”. The spotlights and cameras turn to chef Laurent Deslandes and his beautiful wife as they get up from their table, all smiles. We watch on the big screen as they make their way through the tables, accepting pats on the back, handshakes and the occasional embrace. The music is pumping as they make their way to the stage, we can’t help but be excited for them. It’s verging on emotional and it’s only the first award. I better have some more wine.

I think I need some water, the excitement is too much and the wine is going to my head. I order a jug of tap water because I can’t drink the imported Italian water and still look at myself in the mirror. Michael Broughton of Terroir is on the big screen, sporting a serious mustache. He shows us how he plates the trompette dusted fillet of beef with cep butter sauce, baby asparagus and parsley. It’s being served with a Kleine Zalze cabernet sauvignon. Delicious. How they can keep the food at this level when serving 350 people at the same time is beyond me.

The live music entertainment is performing now. It’s Goodluck, we love them but it’s a bit vibey for dinner music. It makes us want to get up and dance. I resist the urge, miraculously. We’re having some interesting conversation at the table. Abigail is explaining how stressful it was to have to judge the top 10 without assistance this year. Terry, her husband asks me to pass the whiskey, again.

Many people have left their seats and are going from table to table connecting with friends and congratulating winners. I decide to do the same. I have a good chat with Wayne Rademeyer of Buffalo Ridge about biodynamic farming. I hear from Hein Koegelenberg how things are going at Pierneef and with the new cooking school at Leopard’s Leap in Franschhoek. I bump into Michael Broughton and tease him about his mustache. Then it’s time for dessert. So soon!

George Jardin comes on the big screen with his cheeky grin and plates the Valrhona Ivoire torte, rasberries and Ivoire chantilly. Riaad isn’t sure he’s even pronounced it correctly, but one thing is for certain, it looks spectacular. We tuck in to find that it’s as good as it looks. As we’re scraping the last crumbs from the plate, Abigail is back on the stage to announce the top 10.

The moment we’ve all been waiting for. You can say what you want but every restaurant wants to be in the top 10 more than you might think. As Abigail calls each one out, we watch the big screen to see the winners wind their way through the tables to the stage, there are smiles and there are tears of happiness or perhaps relief. Each winner gets their plaque and a bunch of prizes from the new sponsor, DStv Food Network.

Here are the winners from 10th place, La Colombe, Nobu, Jordan, DW Eleven, Terroir, Overture, The Roundhouse, The Tasting Room, The Test Kitchen. All very worthy winners but our minds are running through the list of 20 nominations to try and remember who didn’t make it. Places like Tokara, Planet, Bosman’s, all world class. They must be disappointed. Then it’s time to announce the Eat Out restaurant of the year. Which will it be? Andy Fenner leans over to me and says: “I reckon it’s Peter Tempelhoff”. And he’s absolutely right, the restaurant of the year is The Greenhouse. Well deserved.

But it’s not over. We still have three more awards. Service excellence, chef of the year and lifetime achievement. Nobody is surprised when The Roundhouse wins the service excellence award. Chef of the year goes to Luke Dale-Roberts and the lifetime achievement award goes to Garth Stroebel of the SA Chef’s Academy. He is very experienced in the industry and well respected. The applause indicates the crowd’s approval.

And it’s over. It’s about 11:30pm and for most people it’s time to head home. For the diehards like myself, I’ve organised a little afterparty down the road at Sapphire. About 50 people head to Sapphire and drink and dance till the early hours of Monday morning. I eventually realise my folly and jump in a taxi at about 2am.

Wow, what an event. I’m already looking forward to next year’s awards.