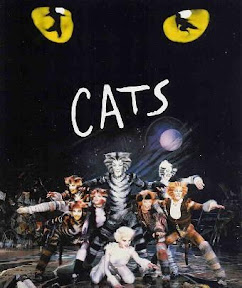 I’m a fan of big stage productions. You might have read my rave reviews of Phantom of the Opera and The Lion King. I also enjoyed Beauty and the Beast, Mamma Mia and Lord of the Dance. Cats, however, was one production I did not enjoy. In fact I was close to doing what the person to my left did, which was fall asleep.

I was quite excited to hear that Cats was returning to the Artscape, after all it is the World’s most loved musical. I obtained tickets to a Friday night show which was a sell out. Again, it’s great seeing Cape Town continue to support the arts so well. R275 (middle price range) for a ticket is not cheap but compared to theatre prices overseas, we have it good. Besides, you can’t put a price on culture.

I’m not an expert on singing and dancing, so I can’t comment too much on the quality of the performance. I thought the cast sang and danced quite well, with some standing out from the rest like the dancing of Magical Mr Mistoffelees and the singing of the song Memory.

As for the show, it’s incredibly boring. There is only one set which doesn’t change and there is no real story line. It’s just songs about various cats and then a gesture of a plot in the second half. I also find it difficult to follow when there is no speaking, only singing because it’s not always easy to understand the words they are singing.

One of the things I like about big productions is watching the orchestra play the score, but I couldn’t see any orchestra for Cats. Either it is well hidden or the music is pre recorded. I’m leaning to toward the latter which is a bit of a let down. How does ticket pricing actually work? Surely if a show has multiple sets, elaborate costumes and an orchestra, it’s costs more so tickets should be more costly and tickets for a show that lacks those features should be cheaper. Am I missing something?

The show is long as well, starting at 7:30pm, it only ends around 10:30pm which feels like ages when you’re not enjoying it. I don’t know why it’s the world’s most popular musical, I can think of several others I would prefer to see. But having said that, it is sold out most days so people must be enjoying it. I guess it depends on your personality.

You can book online at www.computicket.com