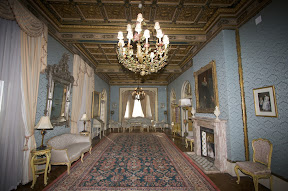 I remember reading about the Natale Labia Museum in the newspaper a while back. Unfortunately the story was not a positive one. The house in Muizenburg which was the original residence of Natale Labia, the first Italian ambassador to South Africa, had been donated to the state as a museum quite a few years before. The article was explaining that the house had been neglected to the point of ruin and was no longer open to the public. They had even had the cheek to sell the adjoining land without permission. The original donation was under condition that the house remained open to the public, and because this condition had been broken, the Labia family was suing to have it returned. The day before the courtcase, the family received a call informing them that the property would be returned to them.

I learnt the details of the story from Antonia Labia Hadres-Williams over lunch at the newly opened Casa Labia Cafe. The house has been completely restored to its former glory and now looks so beautiful it is hard to believe the descriptions of the state it was in when it was returned to the family. Antonia, an interior decorator, took on the enormous project of revamping the house and gave it her full attention for two years. The result is a property which is really quite special and the return of a fabulous addition to Cape Town, which should never have been neglected. The vision is for Casa Labia, no longer called the Natale Labia Museum, to be a cultural centre rather than a museum.

The ground floor boasts several elements, the museum side which is very unique in Cape Town. The house was originally built and decorated in the style of the family home back in Italy, so it is opulent European in style, rather than South African. Amazing antique furniture, authentic wallpaper and fabulous chandeliers all combine to create an visual experience which takes you to a far away place. On the same level is the 14 seater dining room which can be used for a private dinner or for a boardroom meeting. There is a large hall which would be ideal for a cocktail function or screening. Situated in the centre of the house is the Casa Labia Cafe, which also spills out onto the sun porch at the rear of the house for a total of 40 seats. Upstairs is the gallery and the art shop which sells hand made African items. 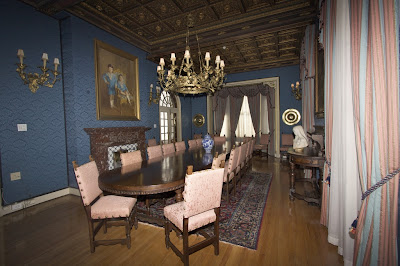 The cafe is decorated in a way which fits in with the style of the house, but it still manages to come across as casual and comfortable. The cafe is open for breakfast and lunch. The breakfast menu has five options which range from the muffin, scone or croissant with cheese and homemade preserves for R24 through to the poached eggs on ciabatta with roasted red pepper and crispy pancetta for R62. The lunch menu is more substantial, boasting ten options which range from soup of the day at R35 to the anti pasti platter at R89. The menu has a subtle Italian influence but there is only one pasta dish and no pizza! There are also a couple of daily chalkboard specials. 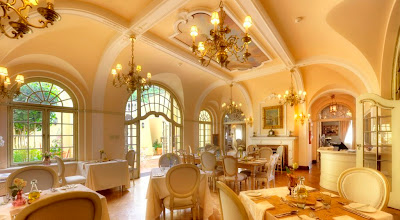 If you’re interested in dessert or just popping in for tea, the sweet menu has a nice selection including things like apple crostata with amaretti gelato at R40, or espresso affogato with almond biscuits at R35 (which if I had noticed I would have tried, damnit!). Judy Badenhorst is the food consultant and she explained to me that she is committed to using as much local and organic produce as possible. If you’re interested in the provenance of your food (which you should be), she is happy to chat to you about the various suppliers she uses and farms from which she purchases produce.

We ordered a selection of starters, smoked sailfish carpaccio with avocado (R48), proscuitto with fresh persimmons (kiwi fruit on the day due to non availability of the fresh persimmons) and rocket (R48), salad of grilled aubergine, orange, beetroot and goat’s cheese (R58) and the anti pasti platter (R89). It was all quite tasty and obviously fresh. For mains I tried the club sandwich (R65) much to everyone’s disappointment but I wasn’t feeling very hungry. I enjoyed it, but envied the tasty looking prawn and chilli linguine others had ordered. 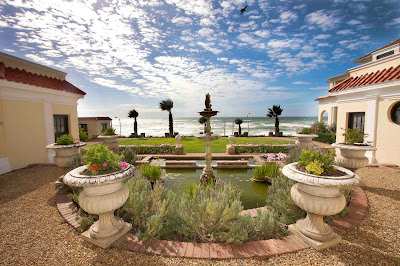 I have to say that Casa Labia is really a special place and should be high on your list of options when considering a breakfast or lunch out. I would seriously recommend you book because when I was there the place was full and they tell me they have been really busy even though they only opened recently. Be sure to click on the pictures and check out the rest of the gallery.