Cafe Milano has opened next to Manna on upper Kloof Street. Those of us who fell in love with Vanessa Quellec‘s pastries when she was at the Roundhouse are very excited to have access to her skills again.

She left the Roundhouse a while ago, but has not been relaxing. Instead she has spent some time in Germany and Italy acquiring some specialised knowledge in breads and pastries to augment her already impressive talents. 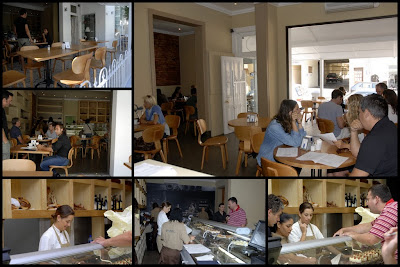 Since returning she has been focused on opening Cafe Milano with Giogio Nava and it finally opened last week. I popped in for a lunch and a cup of coffee and was impressed. The venue looks great, mainly in soft wood tones with a modern looking mural giving the place some visual energy. There are tables on the patio as well as inside and the refridgerated displays are filled with delicious looking pastries and cakes. The shelves behind are stuffed with various types of bread.

The menu is quite small and simple. Breakfast served until midday offers eggs Benedict (R52), english breakfast (R45) and more. The one that caught my eye was the cinnamon & pecan brioche French toast with caramelised banana and proper maple syrup (R58).

Lunch is served until 3pm and consists of some light options like avo salad (R60), caprese salad (R70) and the chicken salad (R70) which is what I had. The salad consisted of some lovely fresh lettuce leaves, cherry tomatoes and emmentaler cheese with slices of grilled chicken breast on top. The chickens are from Spier biodynamic farm and the breast was cooked to moist perfection with crispy skin on top.

Other options are the carpaccio (R70) and steak tartar (R60) amongst others (spot the 95 on Keerom influence). I went on a Thursday at lunch time and the place was about two thirds full which is good considering it has just opened. There is a nice vibe and the food is good too. Don’t leave without a box of those delicious pastries. 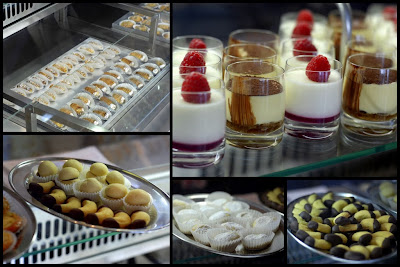