Before I start this review I must say that I’m very happy that La Med is no longer. Many people have expressed regret that La Med is gone because we all have great memories from there. The thing is, they were memories from many years ago. When last did you actually have a jol at La Med? I went there for a meal occasionally and the place was an embarrassment, horrible food, bad service and dirty. It was really a waste of prime property.

Bungalow on the other hand is a fabulous looking spot and a serious upgrade on all that was wrong with La Med. Owned by Paul Kovensky who also owns Paranga, Pepenero, The Cove and Zen Zero. He also now owns the Alphen Hotel, and you might have heard people raving about what he’s done there. So you can probably guess that Bungalow looks fabulous. The road that divides the space in half has been paved with cobblestones with the effect of making the two sides feel more cohesive. The deck on the sea side is still open and filled with dining tables. There is a wooden frame around the outside so I assume in winter they will enclose it with some sort of temporary covering. 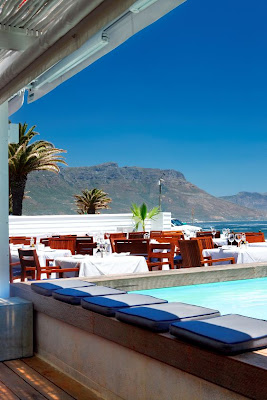 The extent of the revamp is more apparent on the other side. That grimy dance floor where I squeaked many a takkie in the old days is now a beautifully tiled area with several tables as well as ‘day beds’. I’m not really a fan of the beds, I don’t find them comfortable at all. But some people love the idea of reclining, a la Ceasar,while they eat and drink and make merry. The piece de resistance of the room is the purple bar. It’s a circular bar with one half in the room serving drinks and the other half outside serving sushi. The bar isn’t actually purple but below the wooden top is purple fabric with down lighting to make it look super plush. It’s an impressive room. The only thing that detracts from it is the big screen TVs. I don’t understand why they would put TVs there, they are distracting and detract from the sophisticated ambiance.

There are more tables outside, close to the most interesting new addition, the plunge pool! On a hot day it would be great to have your feet in the water while sipping a cocktail. In the evening it adds a cool visual feature to the outside area. Past the plunge pool toward Clifton is the long bar with couches and chairs a plenty. A great option for sundowners.

I’ve eaten at Bungalow several times. Once for dinner with friends, once for a quick sushi and sundowners session and then I also ate there under invitation. The experience was consistent across each visit. While the standard of the food is not bad, it unfortunately falls below the expectations set by the plush decor and not insubstantial prices of the dishes. There are many reasons to go to Bungalow, but the food is not one of them. 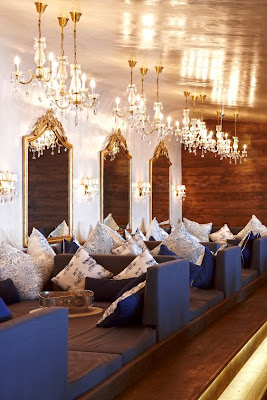 To give you an idea of the menu and prices, here are some of the dishes I have tried. From the starters, Namibian Crab Claw Tempura (R100), Mussels (R60) and Beef Carpaccio (R80). From the mains selection: Fish & Chips (R110), Tagliata which is a kind of cold steak dish, almost like a super sized carpaccio (R160), Fillet (R150), Calamari (R100). In terms of desserts, I tried the creme brulee (R45) and the chocolate mousse (R60). I see they have a chocolate ganache torte (R50) and I wonder if it’s the same one they serve at Zenzero, because if it is, it’s amazing. To give you an idea of the sushi pricing, an 8 piece California roll is about R65, 4 salmon roses cost R70 and 4 pieces of salmon sashimi cost R65.

The wine list is quite extensive, offering a good selection within each cultivar. The prices are below R500 apart from a few exceptions and there are several options at around the R150 mark so not unapproachable. It’s nice to see Graham Beck Brut priced at R220 which is not bad as you’ll pay R100 or more in the bottle store. Interestingly, the Graham Beck Brut Rose costs the same in the bottle store but is priced at R380. That I don’t understand, unless it’s vintage, which costs around R220 a bottle. But then they should really specify that it is vintage.

Our service was always pretty good, a major change from La Med! One thing about high end (in terms of price) restaurants is that they attract high end staff because they know they will make a lot in tips.

So in summary, I am pleased that Bungalow has replaced La Med. The view and classy decor make it a great option if you’re entertaining overseas visitors. The food won’t blow you away but you won’t be sending it back to the kitchen. 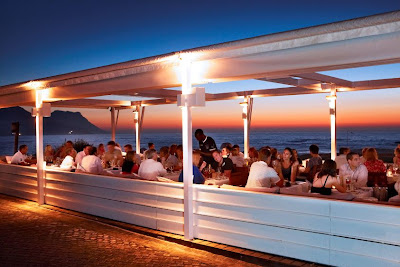