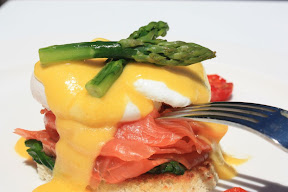 A while ago I attended the launch of Bistro Sixteen82 and was very impressed, you can read my thoughts here. There were some complaints in their first few weeks, but they seem to have their ducks in a row now as the feedback I hear now is mostly positive. I was quite pleased to be invited to try the breakfasts at the Bistro as they sounded spectacular, so I joined several other media people there for breakfast last week.

I’m not going to write too much about what an awesome venue it is. You can read my comments on that, as well as view pictures in my original post. Just to reiterate though, it is a thoroughly beautiful, peaceful setting. For me, this is half the value. The breakfasts are priced about the same as Miss K in Greenpoint, but there you just see the road and the traffic. You get car noise, car fumes and every second person that walks past asks you for money. If I’m going to spend that much on breakfast, I might as well make it a special occasion and drive to Steenberg. Otherwise, I can get an awesome breakfast, and some peace and quiet, for half the price at Cafe Max.

The breakfast menu consists of seven options. One is the healthy option of berries, almonds and yoghurt (R49), another is the only cooked option without egg and that is the selection of mushrooms with buttered spinach and salmariglio sauce (I also didn’t know what that was, Google tells me it’s olive oil, garlic, lemon and oregano – R50). I ordered the bacon and eggs with roasted vine tomatoes (R52) and because I love mushrooms (and because I had special media powers) I ordered a little side sample of the mushroom selection and they were awesome. 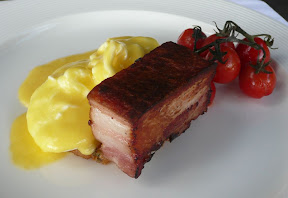 Most of the dishes come with scrambled eggs because that is their speciality (the chef was at Olympia Cafe so if you’ve had their scrambled eggs you’ll understand), but I opted for poached which were also good. Another unique feature of the breakfasts is the bacon which they make themselves. It’s not bacon as you know it (which is very unhealthy in case you didn’t know), it is actually a piece of pork belly which has spent some time in duck fat before being fried for your taste pleasure. It’s very rich, but so good! (You’ll see the bacon in the picture, don’t drool on your keyboard.)

Between us we tried all the dishes, Eggs Benedict (R55), Eggs Royale (with smoked salmon instead of bacon – R58), Scrambled Eggs & Salmon (R58) and the Chef’s Omlette with asparagus, basil and cherry tomatoes (R55). Everyone loved their food. Most of the breakfasts come with potato bread which is unusual but the bread tastes quite normal. What did cause greate excitement though, was the complementary honey brioche they brought us on arrival. It was delicious and went down a treat with the coffee (good coffee, by the way).

It was really a fabulous breakfast at a fabulous venue at a reasonable price. I recommend it wholeheartedly, but definitely book if you plan to go on a weekend.