This is another restaurant that I should have visited long ago but just never got round to it. It would be difficult not to go with high expectations because it has been getting rave reviews and was in the Eat out top ten for 2009 and 2010.

The negative comments I heard were that it lacks atmosphere and that it can be inconsistent, some having been more than once and not enjoyed it as much every time.

When I arrived, I could see why people commented on the lack of atmosphere. The walls of two sides of the restaurant are made of glass so you can see in and it looks a little like Relish looked, with the concrete floor and modern seats. But when you actually walk in, the atmosphere is not lacking, it’s warm in both temperature and ambiance. I went on a Monday night and they were more than half full which is impressive. From our table you could see through a glass window into the kitchen which also adds to the ambiance.

While waiting for my dining partners I browsed the menu and wine list. The printed menu consists of their popular dishes which are always available. For instance, their raw Norwegian salmon salad (R85) and the pig trotter with seared scallop (R105). The wine list has some interesting options and is reasonably priced. We ordered a bottle of the Boer & Brit (R180) which I have heard so much about. It was pretty good. 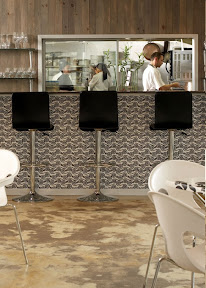 The menu is supplemented by a blackboard of available dishes. I can’t remember all the prices because I did not keep the bill and they are not on the website. I can say the mains on the board were about R145, the mains on the menu about R125 and starters around R50. All desserts were R50. I had the crisp pork belly for a starter and it was fabulous. It was crispy and not too rich, with lovely mash and bits of crisp bacon as well. There was a starter which sounded weird, so we went for it. Fried salami on lentils, damn, it was good. We mopped up the sauce with the last slice of table bread (which was awesome, by the way, soft and fresh with a nice crunchy crust). For mains I stuck with the pork theme and had the pigs trotters. I was expecting a pig’s foot on my plate (a la my grandparent’s farm in Spain), but it was explained to me that it was deboned and served in a phyllo pastry (lucky I didn’t take my father there, he would not have been happy). It was delicious, very rich and interesting with the seared scallops. We also ordered the veal shoulder which was amazing. The meat was tender and flavourful, a fabulous dish. The last dish we tried was the butternut and pumpkin gnocchi, this was a very interesting way to serve gnocchi but absolutely delicious.

The food at Bizerca is for appreciating. When your food arrives at the table, you stop talking and you start tasting. It is really a treat and lived up to my expectations. Especially when the desserts arrived. I had a bit of an unusual dessert experience in that my dining partners had to leave to go to the hospital and have a baby (she was due that week) so I was left with two desserts for myself. I finished them, that’s how good they were. The apple tart (which you have to order before your meal as it takes 45mins) with ice cream was awesome and the chocolate fondant with sorbet and white chocolate creme brulee could have been two desserts, both incredible.

The thing about Bizerca that struck me is that it’s far more approachable than I expected. With all the accolades and supposedly high prices, etc, I thought it would be more about the experience, but it’s actually a really comfortable, casual experience. I guess that is why it is described in the Eat Out awards as best bistro. I’ll definitely be eating there more often.