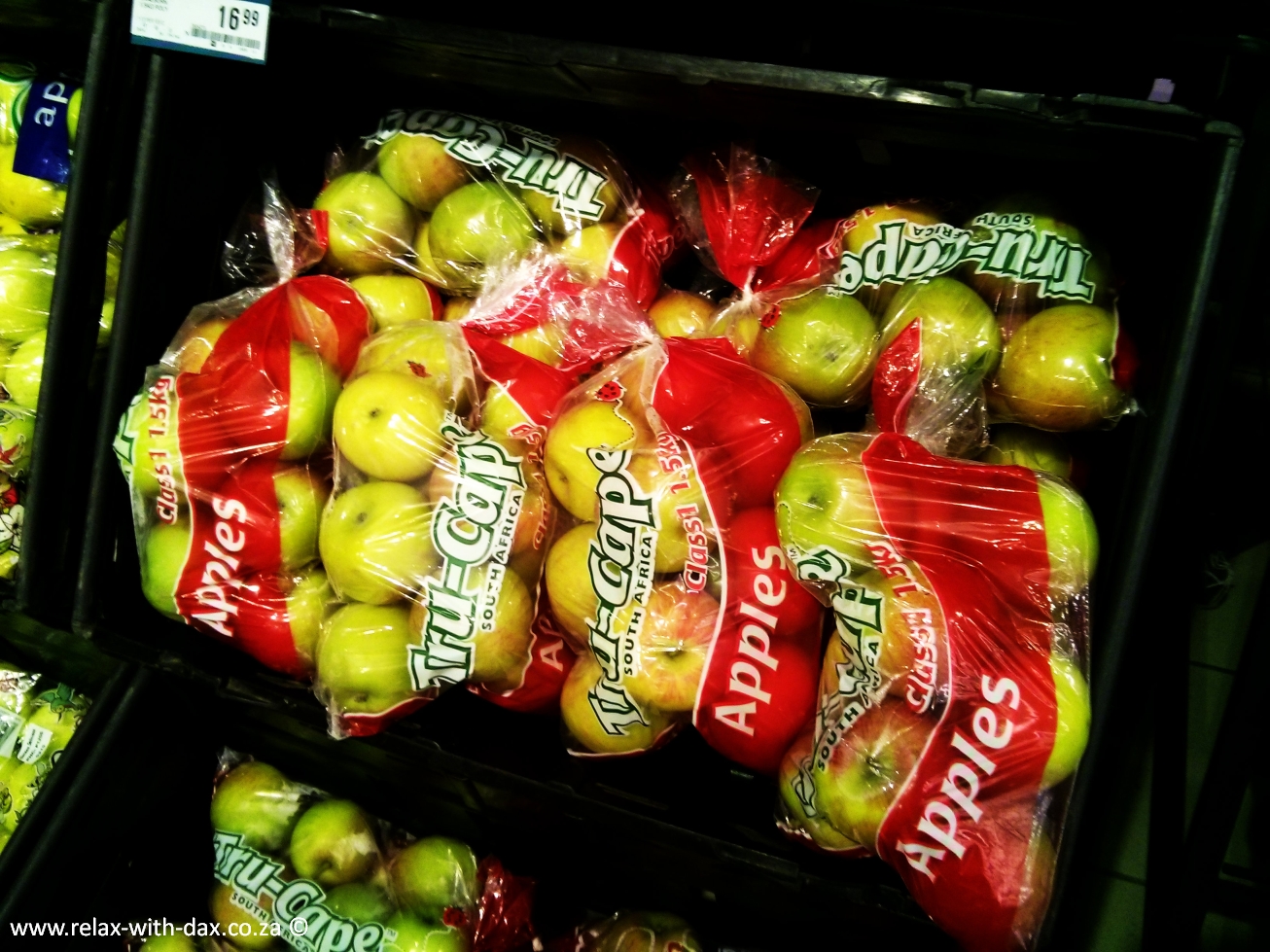 This post is part of a series called, Behind The Scenes, in which I will be looking at the provenance of some of the foods we consume. Looking at how they are produced and processed into the format in which we find them on our supermarket shelves.

I was offered the opportunity recently, by Brian Berkman PR, to go out to Ceres and see how apples and pears are grown and processed. I was hosted by Ceres Fruit Growers (CFG) which supplies apples and pears to Tru-Cape which handles marketing, sales and distribution. Tru-Cape is the largest supplier of South African apples and pears. The relationship between the growers, CFG & Tru-Cape is quite unusual. Normally in a value chain like this, the processors and retailers make a large amount of money while the farmers are paid very little for their product.

However, in this relationship it is not the case because the farmers are the shareholders in CFG and Tru-Cape. The full legal structure is a little complicated and involved shares in other businesses such as the packaging suppliers and the fruit juice processors, but the end result is that instead of the farmers being paid a small amount for their fruit, they benefit from the entire value chain, apart from the retail element. It also allows them to develop a brand and ensure that their fruit is recognised for the high quality it provides.

This is a much more sustainable model and I think other agricultural sectors should try and implement this sort of model. An example of how the model increases sustainability is the hail storm last year which decimated the crops of many farmers in the Ceres area. Because insurance is too expensive, the farmers just had to absorb the loss. But because they are shareholders in the value chain, they are not at the mercy of the middle tier so they could just tighten their belt and hope that the following harvest would be a good one.

Make no mistake, losing a crop is a financial disaster. But while most farmers would lose their farms, the apple and pear farmers of the Ceres valley were able to survive it.

I visited the farm of Calla du Toit (who lost his entire crop to hail last year) and before heading out into the orchards, we had a very interesting chat about the challenges of farming and the trends and developments in the industry. I was interested to understand more about the use of pesticides and herbicides and also the amount of water needed to grow the fruit.

Calla revealed that in fact the biggest challenges facing any farmer wanting to remain competitive are:

Each of these inputs costs money and needs to be optimised in order to remain competitive. He shared with me that technology in irrigation had improved to the extent that they are using only about 25% of the water they used to use. In terms of fertilizer, they are using natural compost around the base of the trees to improve the natural nutrient quality of the soil. This combined with intercropping, where they allow weeds or specific grasses to grow in between the trees, has reduced the need for fertilizers significantly.

Herbicides are not a big issue in fruit growing as weeds are not a threat to fruit trees and can in fact be useful for keeping the soil healthy. Pesticides however have always been an integral part of fruit growing. Tru-Cape fruit complies with the strictest rules internationally with respect to the amount of pesticide residue in the fruit. This is across the board, which means it applies to the fruit Tru-Cape sells locally too.

Pesticide use has also dropped about 75% over time thanks to the use of various new technologies. A very clever technology involved disrupting the mating pattern of the insect. Devices are placed in the orchard which emit a scent or sound which confuses the insects so that they can’t find each other to mate. With respect to the actual application of the pesticide, special spraying machines are used which ‘charges’ the liquid as it is sprayed. This makes it ‘stick’ to the leaves instead of just sliding off.

Other more low-tech, but no less effective, methods are used as well. Such as guineafowl, which have been introduced to the orchards and which eat certain of the pests.

Did you know? Apples and pears are pome fruit as opposed to stone fruit like peaches and apricots.

One of the topical issues around farming lately has been the treatment of farm workers. This can be particularly problematic when migrant workers are involved as they are only there temporarily. Fruit farming involves a substantial number of migrant workers during harvest season, which is about 4 months of the year. Calla explained that in fact, there is competition between farmers for good consistent workers, so they are treated very well to ensure they will choose to return the following year.

They are provided with dormitory style accommodation as well as space to grow vegetables and even keep chickens! They have a sports field and there is even a soccer league among the workers from various farms. They collectively bargain for their level of remuneration and Calla confessed that the relationship is actually very transparent and amicable. Because they have limited expenses for the duration of their contract, they return home with substantial amounts of money, before then heading to another area to work an alternate harvest season.

After touring the farm we headed off to the processing CFG processing plant where the apples and pears are sorted, packed and stored, ready for distribution by Tru-Cape. CFG has 6 processing and packing lines which run 24 hours a day, packing about 250 000 cartons per week. About 30% of the fruit is for local markets and the production split between apples and pears is about 65% apples to 35% pears.

Everything is done in strict compliance with international health, environmental and ethical protocols, such as, Globalgap, HACCP, British Retail Consortium standard for food, USDA and others. To ensure optimum freshness, the cold chain is maintained throughout the transportation and storage stages.

All fruit is traceable back to the orchard in which it was grown.

One of the comments I often hear about fruit in South Africa is that most of the good stuff gets sent overseas and we are left with the dregs. So I was keen to find out if this is actually the case. The answer is that it is half true. The fruit is categorised by size and by number & size of blemishes.

Different markets like their fruit different sizes, for instance Germany likes big apples while the UK likes smaller apples. But everybody likes their fruit to be blemish free! But the fruit still comes from the same trees. So the bigger, blemish free fruit do indeed get exported to countries where they will command a premium price. The fruit we get here will be of a more average size and will be slightly blemished, but taste exactly the same as the fruit that get’s exported.

In fact, Ceres Fruit Growers kindly gave me a bag of export apples to compare to the local apples they had given me and I was unable to tell the difference in appearance or taste. Tru-Cape is conscientious about its brand perception on the local market so it won’t allow fruit of a lower standard to go out under its name.

I often hear about fruit and veg being picked early and stored for long periods of time then ‘artificially ripened’ using some special gas to ready them for delivery. I was sure to ask this question while touring the processing and packaging plant.

The story is half true. The apples and pears are picked at ‘optimum’ ripeness which is not the same as eating ripeness. If the fruit was picked at eating ripeness they would only have a few days to process, package, deliver, sell and get it into your mouth. The optimum ripeness is the stage where the sugars in the fruit are high enough to ensure the fruit is sweet and tasty, but long enough before full ripeness that they can control the ripening process until they get it onto the shop shelves.

There are two methods of controlling the ripeness which they use, refrigeration and controlling the level of oxygen vs carbon dioxide. Using these techniques combined with careful planning with respect to sales and delivery times, allows Tru-Cape to ensure that their fruit is always at its best when you are buying it.

One of my concerns about the fruit and veg we find on our shelves is the limited variety. Over time the lack of biodiversity of large scale farming has a negative effect on the environment and can be very dangerous in the long term if we battle new mutations of parasitic organisms. An example of this sort of thing is the devastation of Gros Michel and Cavendish banana types by Panama disease a few decades ago.

When I tried to think of apple varieties that I have seen on the shelves, I could only really come up with about 6. How many can you think of? But it turns out Tru-Cape sells 18 types of apples currently and about 15 types of pears. In addition they have many more currently in testing. So the variety is certainly more than I thought it was. However I still think this is a big issue in agriculture in general these days. There are actually over 7,500 cultivars of apples so we are definitely only favouring a very small proportion. As I said, this a problem with modern day agriculture in general.

On this topic, Tru-Cape has recently started marketing a new pear. It’s an heirloom variety called Abate Fetel. This variety was originally cultivated by a French monk in 1866. What is interesting about Abate Fetel pears is that you can either eat them when they are crunchy or a few days later when they are softer, they are enjoyable either way. I was given a few of these pears to try and they are delicious, my new favourite.

Overall I was really impressed with Ceres Fruit Growers. The sustainable farming practices, the innovative value chain structure, the processing and the commitment to quality of the Tru-Cape brand. It’s a South African enterprise of which we can be proud.

See more photos in the gallery.