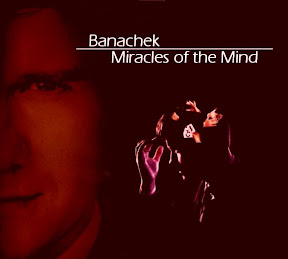 5pm on a Sunday afternoon is an unusual time for a show at the Baxter (or anywhere for that matter). That combined with an uncooperative box office, nearly resulted in me not going to watch Banachek, but I persevered and made it to the show. I’m pleased I did because it was very entertaining (and very frustrating – how does he do those tricks?).

I have been to magic shows and hypnosis shows before, but I’ve never seen a mentalist in action. A friend had been to see some other mentalist who came to Cape Town a couple of years ago and raved about the show, so I was eager to see this one (which might explain my uncharacteristic perseverance). I did a little research on Banachek before I went and found some interesting information on his site and on Wikipedia.

It seems his claims of greatness were not completely unfounded. Seeing the Baxter full at 5pm on a Sunday was also a testament to his reputation. He did not disappoint. I spent the next two hours giving myself a headache as I tried to figure out how he was doing these tricks. He started by making 4 people in the audience stand up and he then guessed what card they were thinking of. That was impressive, but it got more impressive as the show progressed. Some if the tricks were quite drawn out but impressive nonetheless.

What I like about Banachek is that he doesn’t pretend to have special powers. He tells you upfront that it’s all tricks and reading people’s body language. He even explains to you how he guesses what people are thinking or influences what they will choose or do. It’s a little scary what can be achieved, I would hate to be his wife!

I can tell you that if I was married to him, if he didn’t tell me how he does those tricks, we wouldn’t stay married for long. It’s driving me crazy!