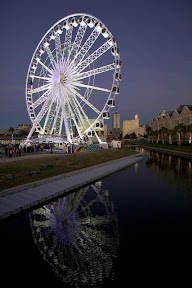 I drive down Buitengracht and onto the freeway everyday to get to work. Coming home one day I saw a giant wheel which I promise was not there in the morning. I later learned that it was fully constructed within a week, which is pretty impressive. Things don’t normally happen that fast around here.

The Wheel of Excellence, as it is known (not a great name I think), came here after spending the Christmas season in Paris and will be here for six months. So yes, you can wait until the mad rush of the World Cup is over before going to check it out.

I went to the media launch and learnt some interesting facts about the wheel. It has thirty six cabins which can hold eight people each which is a total of 288 people! One of the cabins is a VIP cabin with leather seats and mini bar, that one only seats four.

There are several of these wheels operating around the World, including countries like USA, Australia, UK, France and Japan.

For those worried about the wind, it has special ballast tanks which stabilise it.

We went for a ride and it was a very cool experience. Each cabin is all glass so you can see all around and they are completely enclosed so you don’t have to worry about the weather. The cabins have airconditioning, lights (which you can turn on or off), a commentary system (which you can also turn off) and a TV (for blasting you with propaganda – in case you were wondering). We went up at night so we could see the city lights and the stadium looking spectacular all lit up. It is really quite high, you don’t realise how high 50m really is until you are up there. I would like to go in the day because it will be cool to see the mountain and the sea, etc.

Tickets cost R80 per adult, and R50 per child under 12 (under 3 ride free). There are also family discounts available. I reckon it’s well worth it. A ride on the Wheel of Excellence is something you need to do at least once, although I would go once in the day and once in the night to experience both. Catching the sunset up there must be really awesome as well.