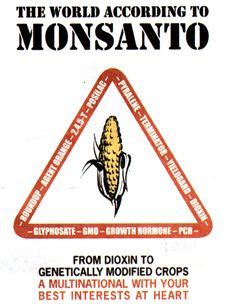 I have watched a lot of documentaries on GM foods and Monsanto and although they each have their own style and there is always some new information, they generally cover a lot of the same material. This recently released documentary is not like that. It takes a very different angle, looking at the history of Monsanto and the way it operates, rather than focusing specifically on GM foods.

The first major product that Monsanto released was Agent Orange, which was used as a defoliant in the Vietnam war. Monsanto maintained that Agent Orange wasn’t harmful to humans. They did some tests and these tests were used to decide that the soldiers harmed by Agent Orange would not receive any compensation because ‘tests’ showed that Agent Orange was not harmful to humans. However, it was established years later that the tests had been tampered with in order to reach a specific conclusion. The reality was that the PCBs in Agent Orange were highly toxic to humans and caused massive death, disability and sickness in the Vietnamese as well as the American soldiers. It also resulted in very serious and wide ranging birth defects, so another generation was badly affected by it.

The story gets worse. The town where Monsanto produced this product was heavily polluted by waste from the plant. When Monsanto was sued years later, it was established they a) they knew that PCBs were extrememly harmful and b) they knew the town was being polluted and c) they did nothing about it! So they sat around making money from people’s suffering and death. They were eventually fined $700m which was a fraction of the profits they made. None of the directors were held personally liable.

The next major product was Round-up. A herbicide which became very popular because it was sold as being organic and even ‘good for the earth’. Later it was established that Round-up is not organic at all and is in fact very bad for the earth. They simply lied.

Then came Posilac, their first GM product. It was a genetically modified growth hormone which was injected into cows to make them produce more milk. They submitted ‘studies’ to show that it was not harmful for the cows or humans (read my thoughts on rGBH here). Once again it was established that they had fiddled with the test data, removing cows and inserting cows at will in order to reach the desired results. Once again, they lied.

In addition to this, there is a lot of bribery (Canadian scientists were offered $2m to give Posilac a green light in Canada – but they banned it), intimidation (researchers who found Monsanto products to be problematic were fired and discredited) and corporate influence (top government officials often got involved in promoting Monsanto’s interests).

The Truth According to Monsanto uses some new people for their interviews and some new examples for their points. Which makes the arguments more powerful and shows that it’s not just a few people or isolated incidents.

So after seeing all this evidence of Monsanto’s lying and test fiddling, one has to ask the question: When they say GM foods are thoroughly tested (which they are not), does that actually mean anything? Even relying on social concience would be dangerous. Surely they wouldn’t let GMOs be released if they knew there were harmful effects? Well, if they can watch people dying from exposure to PCBs outside their factory, while they continue to manufacture and pollute, then they are capable of doing anything.

The very interesting thing is this, when it comes out that GM foods are responsible for environmental problems, and human health issues, guess who is going to pay to fix it? The taxpayers, that’s who. Monsanto will just carry on making money while we pay to clean up their mess.

How does this make you feel?