This is the last of the documentaries I selected to watch at the Tricontinental Film Festival, and it was a great one to end on because it exposed the United States’ involvement in South America for what it really is, the expansion of empire.

America likes to use the words “democracy”, “freedom”, “capitalism”, etc when it describes its motives for intervening in other countries. When you watch this documentary, you realise very quickly those words are irrelevant to American foreign policy. The truth is that America sees the underdeveloped world as a pool of resources to feed its gluttonous, decadent and unsustainable lifestyle. It will do whatever it deems necessary to protect its interests and this includes the interests of American corporations. 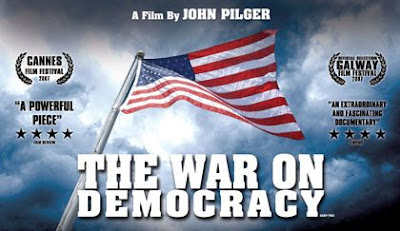 This is one aspect that comes through very strongly, through footage and facts from American involvement in South America since 1945 as well as through interviews with several high ranking government and CIA officials. However, the second strong message of the documentary is that South America is fighting back. Looking at Venezuela and Bolivia, John Pilger shows how the people of South America who have been down trodden for so long have taken control again by voting (democratically) for a president who has their interests at heart. America is very unhappy about it and has tried on several occasions to oust these democratically elected presidents. They will continue to do so to protect their interests.

An interesting side point that comes out of The War on Democracy is how people judge whether a country is successful or not. People look at Cuba and think that it is not a success because everyone is so poor and the infrastructure is dilapidated. However, when you consider that they have been under the most extreme economic sanction for half a century, you have to be impressed by what they have still managed to achieve. 100% literacy, free healthcare, free education, free food staples. If they can achieve all this under extreme sanctions, imagine what they could have done if they were treated fairly.

Now you look at Chile, which is touted as the success story of South America. The reason is that if you go to Santiago, you will see a city of high rise buildings and people walking around in suits spending money and carrying on just like any other developed country. However, as Pinochet’s ‘reign’ neared it’s end, nearly half of the population was in poverty with nearly 20% of them being destitute. These people had nowhere to go and nobody to turn to for assistance because the governent had reduced spending on social services so there was no health care, food or education for the poor. That is not success, that is murder.

This is a fantastic documentary that is both frightening as one sees American imperialism at work and uplifting as one sees the people of Latin America fighting for their rights. You can view it online here.