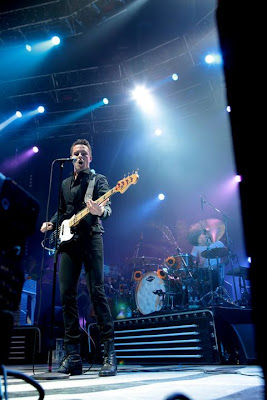 When you pay R600 to go to a concert, included in the price is the bragging rights. You get to tell all your friends and people you meet  how awesome the concert was. Maybe you can even impress girls (or guys). And because they weren’t at the concert, you can even make it sound cooler than it was. Unfortunately with the Killers concert this was not the case. I’m too embarrassed to tell people I went to the concert. While they were off having a good time somewhere in Cape Town, or even happily asleep in their beds, I was sitting in traffic for 3 hours like an idiot. When people ask me how my weekend was, I tell them about the other stuff I did and leave out the Killers concert, because if I tell them I went they will know that I am a loser. If this was a game between me and Big Concerts, I lost. They got my hard earned money and then got to make me sit around in my car for three hours like a chop.

The performance of the Killers was pretty good and Zebra and Giraffe did us proud as well. The Killers played all their popular songs which was cool, but they weren’t very engaging with the crowd in terms of talking to the crowd. Lighting and effects were excellent and the venue (Val de Vie) was awesome because you’re out in the winelands, surrounded by mountains so it is beautiful. But all of this is not that important. If the cost of the concert was just the R600 for the ticket, then all of these would have been great things to talk about. But the concert did not just cost R600, it also cost everyone several hours of frustatration. Some people paid with more than 5 hours of frustration.

I’ve been reading some of the news reports on the concert and have been interested to see how Big Concerts has not apologised at all but rather blamed a) the attendees for not going early enough b) the municipality for apparently not planning for the traffic properly.

Now, I obviously do not know the full story, my observations are that of an attendee but here are my thoughts.

There are two separate issues, one is the arrival traffic which resulted in some people desperately abandoning their cars up to 7kms away from the venue in the hopes they could walk there quicker. And the other is the departure traffic which caused concert goers to get home from 3 to 5 hours after the concert.

Let’s deal with the first issue. Big concerts said it encouraged people to come early and that at 4pm there was only a trickle of cars. We arrived from the Franschoek side (very smart move on my part) just after 4pm and there was already a massive queue from the CT side. The problem was not with the municipal roads but that there was only one entrance to Val de Vie. If everyone had arrived earlier, the queue would have just gotten longer earlier. It was just not possible to get the cars in quick enough.

Big Concerts may have encouraged people to come early by sending out a text message but did they encourage people to come early by opening the gates earlier and providing entertainment, food, drinks and shade? The gates only opened at 4pm, why would you want to arrive before then? Why would I want to sit in the baking midday sun with no shade? The bar only opened at 6pm although they were giving away their warm beers for an hour before that. Anyone one with event experience would know that one entrance to a venue would require several hours to admit that many cars. They should have opened the gates at 1pm and had entertainment from at latest 2pm to encourage people to get there early. There should have been shade so that people did not die.

My rating of the arrival organisation 1/10 (the 1 is for the 2 free warm beers I received).

Now, as for the traffic after the concert, what a debacle. If getting people into the venue wasn’t possible over a 5 hour period, how the hell are you going to get them all out at the same time? They did open the second entrance at one point which meant that everyone got home before sunrise. If they had not opened the second exit, we would have got caught in the rush hour traffic on the N1 the following morning. Why was the second entrance/exit not used the whole time? Where were the marshalls? They all left after the concert so there was chaos in the parking lots and on the exit roads.

They did have a party in the Heineken tent for those that were prepared to stay and wait out the traffic jam. But the tent could only hold a few people and really, it’s midnight and you’ve been there most of the day and you’re tired. Why would you want to party? The food stalls ran out of food, the bar stopped selling booze. there was nothing to stay for. So about 19 000 of the 20 000 concert goers tried to leave. How is that even feasible?

The concert organisation was a joke. My 2 year old niece could have predicted the traffic problems and mitigated them. Have you ever heard of Park and Ride? What an abolute joke and embarrassment. The biggest problem is this, it’s a Sunday night and most of us have to be at work the next day. If I had any inclination that I would be getting home after 2am I would not have attended the concert.

My rating of the departure organisation -5/10.

The fault lies with Big Concerts and nobody else. They owe me an apology and compensation of way more than the R600 I spent on the ticket.