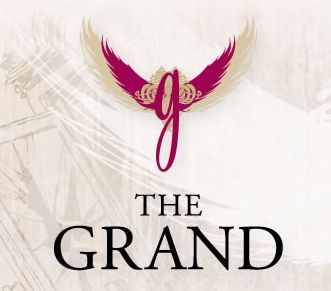 I’ve heard all sorts of feedback about The Grand in Camps Bay. Most of it was positive but some people said it is really pricey. I didn’t really make it a priority to eat there and so they have been open about a year now and I still haven’t been. They have also just opened The Grand on the Beach which people are raving about. I tried to get in there last night but they were full (don’t they know who I am?) so I decided to try the one in Camps Bay. A good friend of mine maintains The Grand in Camps Bay is her favourite restaurant and she has been bugging me to go because she is convinced I will love it. Well, she was right. Even with elevated expectations, I was impressed.

We sat outside on a lovely evening and received a free sunset in the deal. If you do sit outside, do yourself a favour and take a walk around the place first. You need to see the decor and soak up the vibe so that you can appreciate the experience more fully. The decor is really unique and pleasing on the eye. It’s eclectic but cohesive with pieces scattered around which grab your attention if you let them. I can’t really describe the decor in a way which will create the correct picture in your imagination, you must see it for yourself.

We looked through the short menu, initially disappointed at the limited options but we consoled ourselves by assuming that less options means more focused preparation and therefore a better meal. I think we were on the money, because the food was really very good.

The avocado ritz and prawn cocktail are making a comeback but they haven’t shaken off that old school hotel vibe. We ordered a prawn cocktail starter (R70) and it aligned perfectly with the picture we had in our minds of a martini glass with shredded lettuce and steamed prawns with a mayo (mixed with tomato sauce and worcster sauce) dressing. In fact, the old school hotel vibe didn’t stop there, it came on an off white plate with a gold trim and The Grand emblem on the edge. The prawns were good quality, but I don’t think it’s great value at the price. The grilled calamari starter (R65) was quite a generous portion in addition to being tender, offering better value. 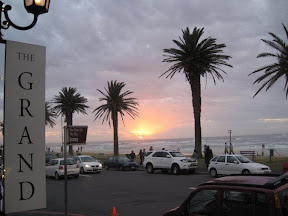 On to mains. The steak bernaise (R140) was one of the best steaks I have tasted in a long time and the bernaise sauce was nice and light. Even the chips were nice. I had the tuna (R120) with a side salad (R25). The tuna steak was seared then sliced and placed around some rocket with parmesan shavings and covered with ginger, garlic and chilli. It was an excellent dish with lovely fresh tuna and a great combination of flavours. The side salad was basic but fresh. The third person at my table ordered the kingklp (R120) which she did not enjoy. The quality and preparation were fine, but she had never had kingklip before and didn’t enjoy the firmness of the fish combined with its characteristic lack of flavour. The side of spinach (R25) was large enough for 4 people so bear that in mind.

There were a couple of mishaps with the food, but it was handled well which is what separates a restaurant from the crowd. For some reason the kingklip did not arrive with the rest of the dishes, but within a few minutes the waiter came to inform us that there had been a mishap and the dish would arrive shortly which it did. They also brought another spinach side to replace the original one which was now not as hot as it should be. When we cut open the steak, it was medium well, but we ordered medium rare so we sent it back and within a couple of minutes they brought us the correct one with apologies.

For dessert we ordered the lemon meringue (R45) which was nice but could have been more tangy. I ordered the affogato (R28) for dessert as it is one of my favourites. The waiter explained that the ice cream came only with a shot of espresso, no chocolate sauce. So I asked for a shot of the chocolate sauce they use for their ice cream and chocolate sauce (old school vibe again) which he happily organised for me. I enjoyed the dessert but it wasn’t as good as the affogato I had at Fish in Kalk Bay.

To drink, we started with a bottle of Pierre Jourdan Rose (R240) and for the meal we selected the Haute Cabriere chardonnay/Pinot Noir blend (R155). The wine list is quite small with only a couple of options by the glass but there is enough of a selection that most people will find something to suit their wine selection criteria.

I really enjoyed my experience at The Grand. The food, service and venue were all above par. I will be back, but first I must try The Grand on the Beach.