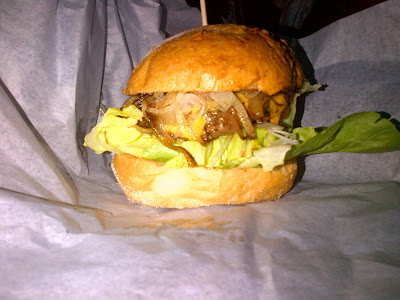 I can’t recall how I heard about The Dog’s Bollocks. It may have been some mentions on Twitter and if you Google it (try dogs bollocks roodehek), you’ll see a bunch of people have reviewed it already. It certainly wasn’t what I was expecting. It’s a guy, called Nigel, selling burgers from his garage. I’m not sure it’s even legal.

It’s supposed to be a takeaway burger spot, there are some tables and chairs (old school wire garden furniture to be more precise) for people to wait for their burgers to be prepared. Wait you will, as these are no McDonald’s burgers which can be slapped together in 1 minute and 17 seconds. These big boys are made individually, with love. So expect to wait around 10 minutes. 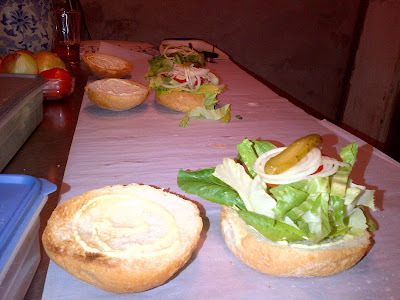 Some people choose to eat their burgers there (as we did). We also bought some of the wine that Nigel makes. It’s called Ukuva iAfrika. It comes in 1.5L cardboard tubes and he charges R50. There were 2 whites and one red on offer, we opted for the 2010 cabernet sauvignon & shiraz blend which was pretty easy drinking.

The interesting thing (well, is there anything about this place that isn’t interesting?) about The Dog’s Bollocks is that Nigel only makes 30 burgers an evening. When they are gone, that’s it. Which means you want to get there fairly early to ensure you don’t lose out. We were there at about 7:30pm. He opens at 5pm, Monday to Saturday. 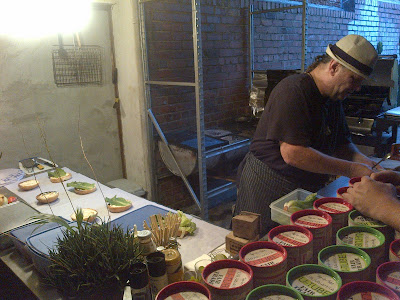 There are about 12 different burgers to choose from (no vegetarian option that I noticed). It’s all beef patty and I noticed a prego option but don’t know if it’s steak or a normal burger with prego sauce. All of them are priced at R55, except for the plain burger which is R50. I went for the Old School 1950’s Style Mega Slider. Nigel tells me this is how burgers were made originally, with melted cheddar and caramelised onion. All the burgers come with a generous amount of salad in it too. My burger was pretty damn tasty, but don’t make the mistake I did of biting into it as soon as I got it. I burned my mouth quite badly. 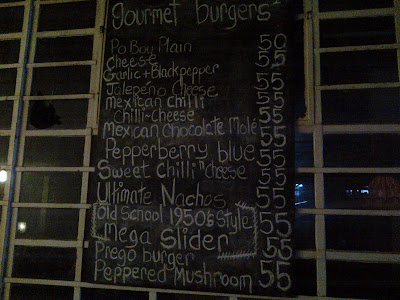 The rest of the table ordered cheese burgers and a mexican chilli burger which actually has a chilli con carne sauce (hot). Everyone was super happy with their burgers, one person even suggested that it was the best burger he had enjoyed in South Africa.

Nigel also makes the Ukuva iAfrika sauces you may have seen around. So those are available if you want a little extra spice. I see there are also nachos on the menu but I didn’t see anyone order them. I assume they use the carne that goes on the Mexican chilli burger, which means they will be pretty tasty.

Nigel said we can tell people about the place but not where it is. So you’ll have to find it yourself, but if you happen to go down Buitenkant Street and turn left after the Shell into Roodehek Street, start looking at number 6. 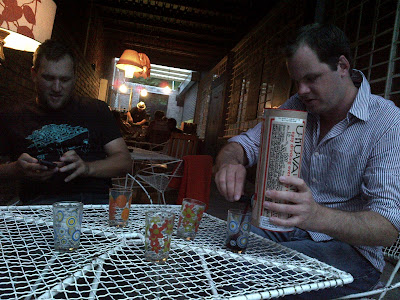