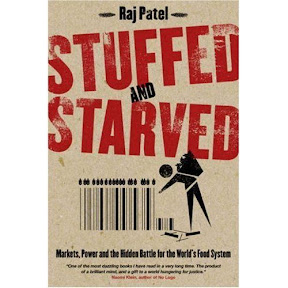 What makes Stuffed and Starved more than just an excellent read is that the author, Raj Patel, is South African. This means that some of the examples he uses to illustrate some of his points are from a South African context rather than the the list of countries generally cited. That’s not to say he doesn’t talk about other countries, just that he includes examples from SA as well. While he is currently a researcher at the University of Kwazulu Natal, he has degrees from Oxford, London School of Economics and Cornell University.

The tag line for the book is: Markets, power and the hidden battle for the world’s food system. When I saw that, I knew it was a book I had to read and immediately ordered a copy from Kalahari.net. I was going to say it’s not a long read, but I realise that I read it quickly purely because I struggled to put it down. While Stuffed and Starved does cover a lot of concepts and examples I am already familiar with. It combines them, with some things which I did not know, into a holistic view of the food system.

One of his main points and, according to him, the root of a lot of the problems is the ‘hourglass’ shape of the players in the food system. There are many suppliers (farmers) and there are many consumers, but between them is a bottleneck of a few processors and distributers. A disproportionate amount of power is wielded by these companies as the can exert pressure on the suppliers and on the consumers, maximising their profits to the detriment of the others. In other words, even though you pay more for your food, the farmer keeps getting paid less and the extra money goes to the ‘middlemen’. Because these ‘middlemen’ are companies, they have no conscience. They don’t care if farmers are not earning enough to feed their families and they don’t care of the poor consumers can’t afford to buy food to feed their families. As long as profits are up, all is good.

The other intersting point that Raj Patel brings out, is that we are conned into thinking that we have ‘choice’, that we are ‘free’ to exercise our choices. What he explains is that standing in a supermarket isle and choosing between 5 brands of baked beans in not choice. The fact is that we have no choice but to go to a supermarket to buy our food. We are well trained rats, living in a system designed to be the way it is. A system which benefits only the few elite at the cost of the well being of the masses.

Stuffed and Starved concludes with some suggestions on how we can individually start to change the system while putting pressure on the powers that be to take action in order to improve the lives of the poor and protect the consumers. The author shares many examples of people and groups that are making a difference. Because of this the book is not just another depressing expose on the ills of this world, but also a ray of hope that things can come right. A very important read for anyone that eats food.